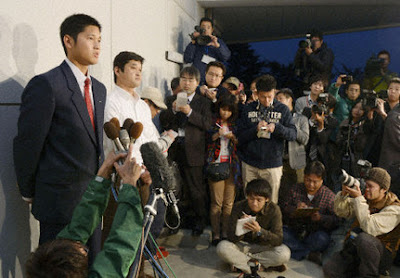 Shohei Otani talks to the Japanese media at a press conference announcing his intentions to come to America.

Japanese high school pitcher Shohei Otani says he will pursue a career in Major League Baseball instead of turning professional in Japan.

Otani, a 6-foot-4 right-hander who has thrown a fastball between 99 and 100 mph, has been scouted by several major league teams including the Los Angeles Dodgers and Boston Red Sox.

The 18-year-old Otani said "I think I will start in the minor leagues but I want to challenge in the majors. It's been my dream since entering high school."

Otani was expected to go in the first round of Thursday's amateur draft in Japan.

If he signs with a major league team, Otani would become the first potential top draft pick to make the direct jump from a Japanese high school to the U.S.

Come to Los Angeles!
Posted by Roberto Baly at 8:00 AM