It's official. From the Dodgers - 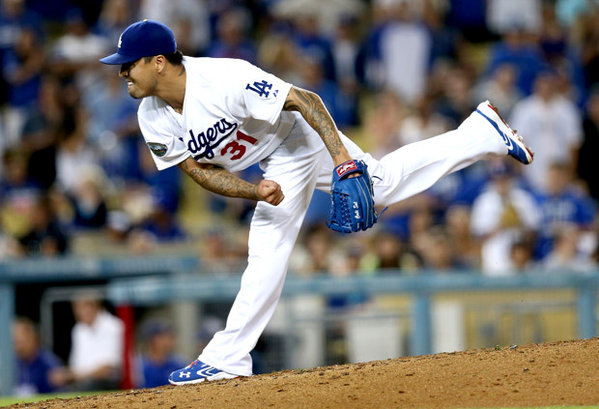 The Los Angeles Dodgers today announced the signing of free-agent right-handed reliever Brandon League to a three-year contract. The announcement was made by Dodger General Manager Ned Colletti.

“We’re excited to bring back a key member of our bullpen, which was a team strength last season,” said Colletti. “"We were very pleased with what Brandon provided us after we acquired him. He pitched in a couple of different roles including the closer role most of the last month where he was very effective.”

“He gives the club someone who has saved more than 50 games the last two seasons and fortifies our bullpen in a number of ways. It's imperative that to compete in the NL West teams need a strong bullpen with power arms, experience and depth.”

The 29-year-old was originally acquired by the Dodgers at the 2012 trade deadline and proved to be one of the league’s most reliable relievers down the stretch, going 2-1 with six saves and a 2.30 ERA in 28 appearances. League finished the season by tossing scoreless relief in 20 of his last 21 appearances starting Aug. 21 and posted a 0.55 ERA (1 ER/16.1 IP) in 15 appearances in September and October, the sixth-lowest mark in the National League in that span. Overall, he went 2-6 with 15 saves and a 3.13 ERA in 74 games and allowed just one home run in 72.0 combined innings last season with Los Angeles and Seattle.

The Sacramento native was selected as an American League All-Star in 2011, when he posted a 2.79 ERA and ranked third in the AL and tied for fourth on the Mariners’ all-time single-season list with 37 saves. League recorded 14 consecutive saves from May 18-July 4, 2011 and his 88.1 save percentage in 2011 was the sixth highest in Mariners’ history. In his first season with Seattle in 2010, League led AL relievers with a career-high nine wins and ranked among the circuit’s leaders in relief innings pitched (79.0, 2nd) and appearances (70, T-10th).

League attended St. Louis High School in Honolulu, HI, where he was named 2001 Gatorade Hawaii Player of the Year, and was originally selected by the Toronto Blue Jays in the second round (59th overall) of the 2001 First-Year Draft. He resides in Encinitas, CA, with his wife, Sasha, and three children, Skylar, Lexi and Cali.
Posted by Roberto Baly at 5:48 PM

We need Jansen to return 100% to make this work.