Yesterday, Buster Olney of ESPN reported that the Dodgers were open to the idea of trading right fielder Andre Ethier. {linked here} 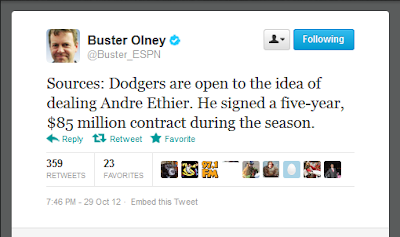 Weird, no? Since Dodgers and Ethier agreed to a five-year $85 million extension back in June. It's just going to be difficult to trade him. $85 million for the next five years? Who is willing to take that? The Yankees?

Trading Ethier would clear a spot in the outfield for a potential signing. Who? Bring back Shane Victorino? I hope not. And I don't see them going after Josh Hamilton.

Of course, Buster Olney might be wrong and this is B.S.

Pure BS. That buster named buster is trying to get some fame off dragging Dre's name through the mud.

Buster is the only person recently who picks the Giants to win the world series every season, so maybe he knows something we don't. It's also a good idea to get on his good graces.