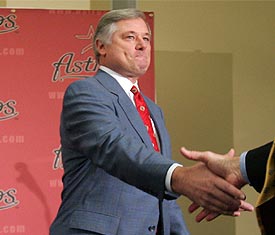 “Gerry brings a wealth of senior level experience and knowledge that will assist baseball operations at all levels,” said Colletti.

Hunsicker will assist Colletti and President and CEO Stan Kasten with the Dodgers’ big league club while also lending his expertise to international scouting and development, pro scouting and minor league development. The 2013 season will be the Houston resident’s 35th in Major League Baseball.

Hunsicker previously served as the Tampa Bay Ray’s Senior Vice President, Baseball Operations, a position he held since November 2005. Hunsicker was part of principal owner Stuart Sternberg’s new management group and was a key figure in reshaping their baseball operations into the successful department it is today. With the Rays, Hunsicker was instrumental in helping to create significant presence in Venezuela, the Dominican Republic, Colombia and Brazil. In 2009, he also oversaw the Rays expanded efforts in Asia and Europe.

Hunsicker began his career in baseball in 1978 and his experience spans four decades, including nine seasons as Astros General Manager from 1996-2004. Under Hunsicker, Houston posted the sixth-best winning percentage in the Majors during that period (.544, 793-665), set a franchise record with 102 wins in 1998 and reached the postseason five times in nine seasons. Hunsicker was named Sporting News Executive of the Year in 1998 and the core he assembled of Craig Biggio, Jeff Bagwell, Lance Berkman, Brad Ausmus, Roy Oswalt, Andy Pettitte and Roger Clemens won a National League title before falling to the White Sox in the 2005 Fall Classic. He also spent seven seasons in the New York Mets organization as Director of Minor League Operations (1989-90), Director of Baseball Operations (1991) and Assistant Vice President of Baseball Operations (1992-95).

The Collegeville, PA, native received his bachelor’s degree from St. Joseph’s University, where he played baseball and was named to the All-Mid-Atlantic Conference team. He holds an M.S. in management from Florida International University and also served as the school’s Assistant Athletic Director and Assistant Baseball Coach from 1975-78. Hunsicker has been honored with inductions into the St. Joseph’s Athletic Hall of Fame and the Texas Baseball Hall of Fame and also received the Torch Award of FIU, which recognizes distinguished alumni from the university.
Posted by Roberto Baly at 3:10 PM