Yasiel Puig will be playing in the Arizona Fall League. 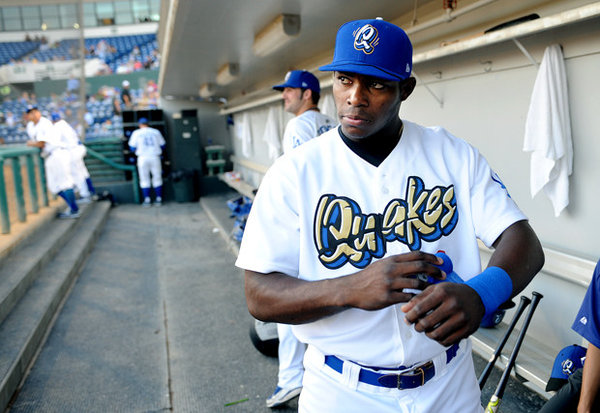 The Dodgers will be sending nine minor leaguers to the Arizona Fall League. The AFL starts tomorrow. Dodgers minor leaguers will be competing alongside players from the Baltimore, Chicago (NL), Detroit and Houston organizations for the Mesa Solar Sox.

38 players are in the Mesa roster. Nine are Dodgers.

Clicking name will take you to Baseball Reference for career stats.

24 years. Has a degree in economics from Harvard. Dodgers signed Eadington as an undrafted free agent. Spent 2012 with Great Lakes, Chattanooga and Rancho Cucamonga.

22 years. Born and raised in Cuba. Drafted in the 3rd round of the 2012 MLB June Amateur Draft. Pitched just one game this year in Rancho Cucamonga.

Read this story by J.P. Hoornstra on how Garcia left Cuba. {linked here}

22 years. Drafted in the 1st round (16th) of the 2011 MLB June Amateur Draft. Was a closer for Stanford University. One of the top prospects in the Dodgers organization. Struggled in 2012 splitting time with Rancho Cucamonga and Chattanooga.

22 years. Puerto Rican. Drafted in the 16th round of the 2007 MLB June Amateur Draft. Split time with Rancho Cucamonga and Chattanooga as a starter. 96 K's in 86.1 innings at Chattanooga.

24 years. Drafted in the 15th round of the 2006 MLB June Amateur Draft. 'Griff' spent all year in Double-A Chattanooga. Click here for a video of Erickson taking BP at Dodger Stadium last January.

24 years. Dominican. Has been in the Dodgers organization since 2006. Spent all year in Chattanooga hitting .278

20 years. Drafted in the 11th round of the 2010 MLB June Amateur Draft. Dodgers named him Player of the year for 2012. Played for Team Israel in the World Baseball Classic qualifying games. Is a top 10 prospect in the Dodgers organization, according to Baseball America.

21 years. Cuban. Dodgers signed Puig to a 7 year deal worth $42 million last June. Spent the year in Arizona Rookie ball and Rancho Cucamonga. Killed the ball in both levels. Is in the Dodgers 40-man roster.

Go to the AFL website for info and schedule.
Posted by Roberto Baly at 1:30 PM