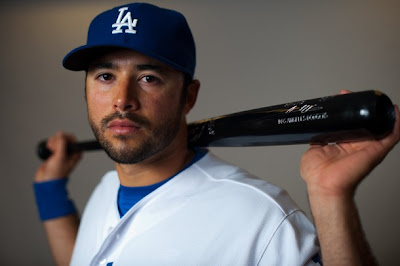 Major League Baseball and MLB Advanced Media today named Dodger outfielder Andre Ethier a finalist for the 2012 Hank Aaron Award, which recognizes the most outstanding offensive performer in each league. Fan voting begins today for the award exclusively online at MLB.com and Dodgers.com and for the third straight year, a special panel of Hall of Fame players led by Hank Aaron will join fans in voting for the award, which was established in 1999. Last season, Matt Kemp became the first Dodger to be honored with the Hank Aaron Award.

The Hall of Fame panel led by Aaron includes some of the greatest offensive players of all-time –Tony Gwynn, Paul Molitor, Joe Morgan, and Robin Yount.  These Hall of Famers – who combined for 12,119 hits, 888 home runs and 4,984 RBI – have all been personally selected by Aaron to lend their expertise to select the best offensive performer in each League.

Beginning today and continuing through October 16 fans will have the opportunity to select one American League and one National League winner from a list comprised of one finalist per Club. The winners of the 2012 Hank Aaron Award will be announced during the 2012 World Series.

“Named in honor of one of the greatest hitters and competitors of all-time, the Hank Aaron Awards recognize each league's best all-around offensive performer," said Baseball Commissioner Allan H. (Bud) Selig. "Hank's career will forever remain a model of excellence and consistency, and I am glad that the 30 club nominees are following the example of a pillar of our game.”

“It is a real privilege to have my name on the award that recognizes the most outstanding offensive performer in each league,” said Hank Aaron. “With so many talented players in the game today, I am thankful to have the assistance of my fellow Hall of Famers and the fans to select the winners.”

The Hank Aaron Award was introduced in 1999 to honor the 25th Anniversary of Aaron breaking Babe Ruth’s all-time home run record, and, at that time, was the first major award introduced by Major League Baseball in more than 25 years.
Posted by Roberto Baly at 11:00 AM