Friday Night Fireworks will be set to a Frank Sinatra soundtrack in celebration of Hall of Fame Manager Tommy Lasorda’s 85th birthday. Singer Tony Orlando will also sing “Happy Birthday” to Lasorda in-game. At the conclusion of the game, all fans are invited to go on the field to watch Friday Night Fireworks.

The Dodgers are thanking and paying tribute to the men and women of our nation’s armed services by honoring a Veteran of the Game at every 2012 home game.  Military members are given Field level tickets, complimentary parking, are invited to watch batting practice and are recognized during the game.

The Veteran of the Game tomorrow is U.S. Marine Corps Sergeant Brian Clark of San Dimas, CA. Clark has served four combat tours, two in Iraq and two in Afghanistan. He has also served in the 15th Marine Expeditionary Unit and in the 31st Expeditionary Unit traveling to Thailand, Qatar, Bahrain, Hong Kong, the Philippines and Kuwait.

The Dodgers have invited their Minor League partners, the Albuquerque Isotopes, Chattanooga Lookouts, Rancho Cucamonga Quakes, Great Lakes Loons, Ogden Raptors and La Guaira Tiburones of the Venezuelan League, to Dodger Stadium for an annual end of year partners’ meeting. After a full day of meetings, the group is treated to the game. Earlier today, the Dodgers named right-handed pitcher John Ely and outfielder Joc Pederson as the Branch Rickey Minor League Pitcher and Player of the Year, respectively. Prior to Friday’s game, both Ely and Pederson will be honored in an on-field pregame ceremony.

In celebration of Hispanic Heritage Month, the Dodgers are offering fans a $9 Reserve Level ticket, discounted more than 40 percent, for La Gran Fiesta – Viva Los Dodgers on Saturday. Fans can access this ticket offer by entering the code VIVA at www.dodgers.com/viva and www.losdodgers.com/viva.

As part of Hispanic Heritage Month, Valenzuela will also play host to a group of 60 LA-area youth, the El Monte Dukes and Fillies baseball and softball teams, at the game on Saturday and will meet the group on the field for a photo opportunity at approximately 5:15 p.m. The youngsters will be treated to tickets, a Dodgers T-shirt and a meal voucher.

The Veteran of the Game is Army Staff Captain Robert E. Small III of San Gabriel, CA. Small has served in numerous deployments as an AH-64D Longbow Apache Helicopter Pilot and is preparing to deploy again at the end of this year. 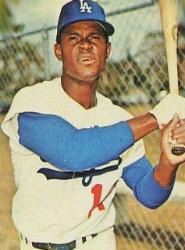 Mota will throw the ceremonial first pitch in celebration of his half century in Major League Baseball. 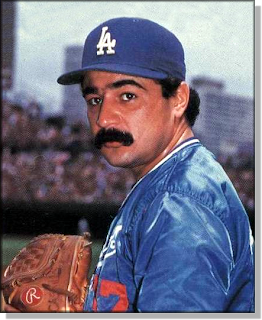 The Dodgers are also welcoming back Dodger Alumnus Bobby Castillo. An active Dodger alumnus in the Los Angeles community, Castillo suffered a stroke this past spring and has made a full recovery. He will throw the honorary first pitch. Castillo, a member of the 1981 World Championship team, taught Fernando Valenzuela to throw a screwball. Valenzuela will catch for his former teammate and friend.

Major League Baseball and the Los Angeles Dodgers will celebrate Roberto Clemente Day with a video tribute to Clemente. Clemente dedicated his life to helping others. In honor of the late Hall of Famer and humanitarian, each Club recognizes a player who best represents the game of baseball through positive contributions on and off the field. The Dodgers nominee for the 2012 Roberto Clemente Award presented by Chevrolet is Clayton Kershaw. Kershaw will be recognized on the field prior to the game with an award and check presentation for a donation to Kershaw’s Challenge by Chevrolet represented by District Sales Manager for Los Angeles and the Inland Empire, Felix Wu.

Kershaw is one of 30 club nominees eligible to win the league-wide Roberto Clemente Award presented by Chevrolet.  Fan voting and a special selection committee will determine the national winner, who will be announced at the World Series. Fans can vote for Kershaw at www.mlb.com/clementeaward.

The Dodgers are also offering USC Trojan fans 50 percent off on Saturday that includes a discounted ticket and a USC-themed Dodgers cap. Tickets can be purchased at www.dodgers.com/Trojans using the promotional code USCTROJANS.

It is Scout Egg Drop Day. There will be more than 500 Boy Scouts participating in the 11th annual Scout Egg Drop Day at Dodger Stadium. Boy Scouts are challenged to a 6-story egg drop contest at the ballpark prior to the game, where they will engineer the perfect device that will keep a raw egg from breaking. All scout participants will be introduced on the field prior to the group will present a large American flag in the outfield during the national anthem. 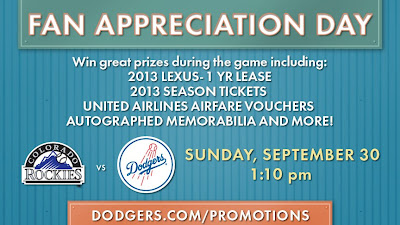 The Dodgers will celebrate Fan Appreciation Day. Dodger players will be at turnstiles throughout the stadium to thank fans. Dozens of prizes will be awarded to fans during the game, including a first-of-its-kind prize offering fans the chance to win “A Visit from the Dodgers’ Grounds Crew to your Home Lawn” by members of the Dodgers’ grounds crew led by Turf Manager and Grounds Director Eric Hansen. Other Dodger experiences include one-hour batting practice for 10 with Dodger Manager Don Mattingly and lunch for two with Hall of Fame Manager Tommy Lasorda.

The Dodgers’ grounds crew visit will offer a winning fan the option of three unique garden upgrades executed by Hansen and members of his staff. The winner of this prize will choose three of the following offerings: a mowed and edged lawn, a square of Dodger Stadium’s grass planted in their lawn, the LA logo stenciled onto the lawn, installation of one authentic Dodger Stadium base, choice of warning track or infield dirt to be spread in a designated location and/or a professional irrigation inspection.

Complete rules and more information on Fan Appreciation Day can be found by visiting www.dodgers.com/fanappreciation.

Dodger catcher A.J. Ellis has been named the winner of the seventh annual Roy Campanella Award, which is given to the Dodger player who best exemplifies the spirit and leadership of the late Hall of Fame catcher. The award, which was voted upon by Dodger uniform personnel, will be presented to Ellis by Campanella’s daughter, Joni Campanella Roan, during pre-game ceremonies.

Ellis and his wife, Cindy, have been active in the community, reading to Glendale, AZ school children as a part of the Read Across America celebration during Spring Training and supporting his teammates charities by attending Clayton Kershaw’s Texas Hoedown and Dodgers Dream Foundation Bowling Extravaganza. The 31-year-old has been a steady presence behind the plate all season, ranking second on the club with 127 games played and fourth among Major League backstops with 125 games and 1,097.0 innings as a catcher.

For the third consecutive year, the Dodgers Dream Foundation (DDF) will make a financial contribution to support the Roy and Roxie Campanella Physical Therapy Scholarship Endowment at California State University, Northridge (CSUN). Campanella was inducted into the National Baseball Hall of Fame in 1969 and was among the first three Dodgers to have their uniform numbers retired alongside Jackie Robinson and Sandy Koufax. Campanella remained active in the Dodgers’ Community Relations Department until his death on June 26, 1993 at the age of 71.

Nathan Blank, a @Dodgers Instagram follower, won the opportunity to throw the ceremonial first pitch for his submission in the club's #LATradition Instagram photo contest which received more than 4,500 submissions.

“Echoes of Faith” will sing the national anthem and “God Bless America.” The group was chosen from the Red, White and Dodger Blue National Anthem Contest for Fan Appreciation Day.

The Veteran of the Game is U.S. Army 1st Sergeant Nicolas Montaño of Burbank, CA. Montaño enlisted in 1982, has served in Guatemala and Iraq and has received multiple awards including a Bronze Star and the Global War on Terrorism Medal and the Iraq Freedom Medal.

Kids Run the Bases will take place following the game.