I wanted to go to this event really bad. {linked here} But unfortunately, I couldn't make it. I even made reservations.

It looks like I've missed many events this summer. Baseball comes second now. 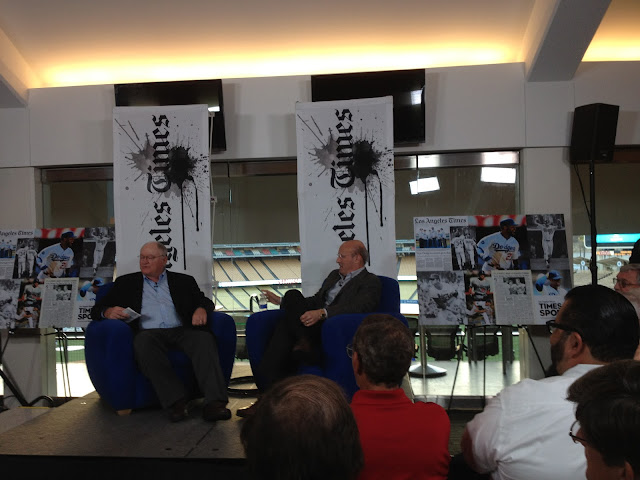 I didn't see you last week at the LA Times event with Stan Kasten so thought I would send you a summary.  It will be televised at a later date.

The most important info was that they served free appetizers including chicken skewers, stuffed mushrooms, ahi tuna on crispy crackers, and free soft drinks.  I think I would have preferred Dodger dogs because I was still hungry after, but it was very generous for the Dodgers and the LA times to provide this.

The first few questions were about McCourt.  I taped his comments on McCourt but it basically came across like stock political spin to me and didn't even think it was worth posting.  Kasten is very polished and careful in what he says.  From what he said I took it to mean that to get the Dodgers, they had to have McCourt still retain some economic interest in the property.  The new owners make all the decisions but McCourt still gets a cut of the money.  The goal of the new owners was to get the team first and foremost.  They believe that they will make money long term, not only through the new tv contract, but by developing the Dodger brand.

Kasten said that they almost made the trade to get A Gonzalez in July and at one point thought they had a deal done.  Clearly there was more he wasn't saying.  He said that they are focusing on rebuilding their farm system and being aggressive with international signings.  He reported that international signings by the Dodgers dropped in the last few years to almost the worst in baseball and this is where 30% of MLB players come from, so if you aren't being aggressive internationally, it's almost impossible to compete.

He suggested that they think Billingsley is done for the year.

He said that when they bought the team, Magic signed two jerseys for each player.  The players were ecstatic and jumping around like little kids.  One for them to keep and one for them to give to their favorite charity.  Kasten told the players that he wants to make player-fan interactions more common and told them that as happy as they felt, this is how every fan feels when you sign for them.  I thought most Dodger stars are good at this anyway, but it was good to hear this as a team philosophy.

Kasten said their short term goals include wireless in Dodger Stadium and being able to order your food through your phone.  He said they have been trying to work on the concession lines but they are limited in how many hot dogs they can cook.  If it were possible to ask a follow up question, I would have asked why there are still long lines even if I don't want a hot dog.  To me, the problem is the organization and management of the workers and who they have working, not only how long it takes to cook hot dogs.

They also want to have more restaurants and bars at the Stadium to hang out in before and after games.  Tailgating areas are not going to happen because they feel they don't have enough space as it is, and the concern for fire.

Their long term goal is to beautify the stadium and have hired the architect who worked on Camden Yards and Turner Field.  They plan on adding historical Dodger items to the concourses, kids areas for parents who have kids who don't want to sit in their seats after the third inning, and more interactive things.  They are limited by the physical structure of the stadium as they cannot make the concourses wider.  The stadium is old and they needed to upgrade the electrical system to even "plug another toaster in."

In my personal opinion, I think Dodger Stadium needs to be taken down and a new modern stadium built in its place based on the limitations he was laying out.  Kasten also said there is no easy fix for the traffic getting into and out of the stadium.  In my opinion Dodger Stadium compares poorly to other MLB stadiums and compared to other LA venues like Staples Center, and even the Home Depot Center.  Kasten said there are no current plans to move, or to make a new stadium, or naming rights, as it just seems like there are a lot of immediate changes that need to be made first.

After the seminar, there was a situation with the ticketing manager that I wanted to bring up.  He was a nice guy and I don't want to include his name so he won't get any more outrageous requests.  One middle aged woman wanted to go on the field before the game to give the players the ball like the kids do, so Kasten told the ticketing manager to make that happen.  After the seminar, various fans went to this ticketing manager to voice all sorts of suggestions and complaints.  One guy was asking for a job in sports marketing.  Another wanted the ticket manager to see if Vin Scully could get a statue.  A couple of large women rudely butted in and said they didn't like how the Dodger vision shows people eating food.  I would suggest if they don't want to be seen eating a lot of food, based on their large size, they could benefit in cutting back what they eat.  Please tell your readers not to be rude like these women.

Some other fans asked all sorts of crazy requests, so much so, that I wanted to ask him if the Dodgers could just drop money from helicopters on the fans to see what he would say.  I think perhaps a lot of these fans think by talking to this ticketing manager that he could make all of their dreams come true.  I think he was very polite, but had as much influence as when you order season tickets and the ticket manager calls you and asks you questions as if you had input into the team operations, and then they try to sell you more tickets for next year.

The ticketing manager was able to tell me that there are no more plans for Dodger organized road trips, like for the Yankee Stadium trip next year.  They also didn't have any information on Think Blue/Think Cure activities this weekend.  I figured if he didn't know what the Think Cure activities are and didn't even know that there is nothing listed on the Dodger website link for Think Blue, then he's not going to be able to make Dodger Dogs fall from the sky.

I think a lot of fans had the same suggestions and comments.  If Kasten or his spokespeople answered more questions like this perhaps in a town hall forum, I think he could address a lot of these issues at the same time.

As we were leaving, we went though the VIP suite with the pool table.  They let us take a photo with the 1988 championship trophy, and gave us the framed photo.  This was a nice touch.

I will say that Kasten came across very well and think that he is going to be a great owner, and that this ownership group seem like visionaries who are also good at business and bringing fans what they want.

Keep up the good work Roberto!

Thank you Steve!
Posted by Roberto Baly at 1:00 PM