I didn't watch much baseball this past weekend. Other plans got on the way. In a way, it's good that I didn't get to see the Giants win the West. Who would have thought that after Melky Cabrera got suspended, the Giants would get hot while the Dodgers forget how to hit?

The Giants are currently in first place by 11 games over the Dodgers. This is a team that came into Dodger Stadium on Aug. 20 trailing the Dodgers by half a game in the NL West.

The Giants swept that three-game series and have never looked back. They have actually played better without Melky Cabrera, the league’s leading hitter.

They entered the stretch and played the way the Dodgers talked about playing, needed to play. The Giants have won 10 of their last 11 games.

Braves will get the first spot. Getting the second spot will be difficult. I say it's difficult because even if we keep winning, you're hoping the Cardinals and Brewers lose. 9 games to go! 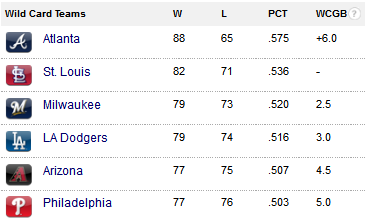 YES IT IS. i guess u have to give sf credit. without melky.(How about deduct some wins since he "cheated") SF usually steps it up at end of season. i don't believe we are doing so poorly after trade. we did hav a lot of injuries this year. Kudos to Kershaw and Fife for trying hard. chemisty is truly intangible and invaluable key for success.