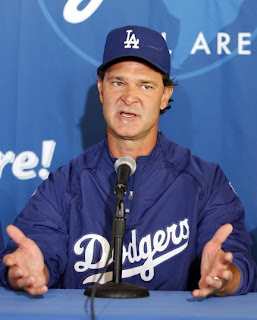 We're not going to win the division that's for sure. We can only hope the bats wake up and the Dodgers can get a Wild Card spot.

"We feel pretty lucky to be where we are in the standings," said Dodgers manager Don Mattingly. "I'm having trouble explaining our offense right now."

In a word, it has been awful. The Dodgers have scored only 25 runs total in the 11 games they've played so far in September, a bitter pill to swallow for Los Angeles fans who thought their lineup would hum like a video game after the team traded for Hanley Ramirez, Adrian Gonzalez and Shane Victorino this summer. A severe power outage has a lot to do with the club's struggles. Going into Thursday night's contest, Andre Ethier hadn't homered in eight days. Kemp's last home run was on Sept. 2. For Hanley Ramirez, it was Sept. 3. And Adrian Gonzalez hadn't gone yard since his first at-bat as a Dodger back on Aug. 25.

"Maybe they've been trying too hard," said Mattingly. "It seems like we're pressing a bit. We just need to relax and play."

I think it's time for the Mattingly experiment to come to an end. Who's with me?

Watching them play for the last month has been nothing short of depressing and maddening. I wish I cared less about the Dodgers, because they are bringing me nothing but heartache right now.

It is depressing but i cant help to agree with Mattingly... I feel the team feels the pressure & is trying too hard... they are not playing because they enjoy the game now and you can feel it by just watching them :/ it sucks !