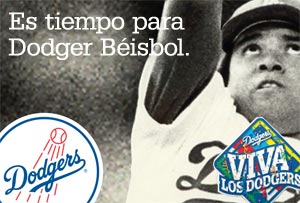 On Saturday, September 29 the Dodgers will hold La Gran Fiesta!

George Lopez will be making a special appearance.

Gates open at 2:10pm and the event is FREE with a ticket to the game.

Get $9 Reserve Level tickets for this game. Enter code VIVA

More details will be announced later this week. Stay tuned.
Posted by Roberto Baly at 12:30 PM

Just wanted to let you know.., the flagpole from Ebbets Field is back!

thats it only the three? no players.. thats way different then last year.. i had hope agon would be there atleast.