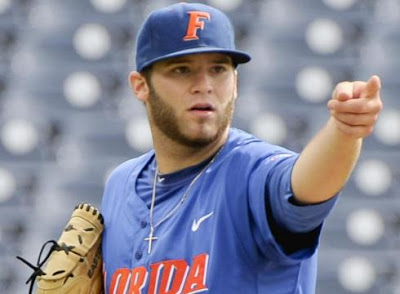 The Los Angeles Dodgers today transferred right-handed pitcher Chad Billingsley to the 60-day disabled list (right elbow pain) and selected the contract of left-handed reliever Steven Rodriguez from Double-A Chattanooga. Billingsley, who last pitched on Aug. 24 against the Marlins, went 10-9 with a 3.55 ERA in 25 starts this season, finishing the campaign on a six-game winning streak.

Rodriguez, 21, has gone 1-0 with five saves and a 0.92 ERA (2 ER/19.2 IP) in 21 combined relief appearances with Single-A Great Lakes and Double-A Chattanooga in his first professional season after being selected by the Dodgers in the second round (82nd overall) of the June First-Year Player Draft out of the University of Florida. Since being promoted to Chattanooga on July 28, Rodriguez has limited opposing hitters to a .149 batting average (7-for-47) with 22 strikeouts in 13.2 innings. As a collegiate hurler, Rodriguez earned first-team All-Southeastern Conference honors as a junior in 2012 and pitched three seasons at Florida, compiling a 9-4 record with seven saves and a 2.19 ERA in 86 games (two starts). His career ERA was the lowest by a Gator since aluminum bats were introduced in 1974 and he ranks among the all-time Florida leaders in strikeouts per 9.0 innings (10.64, 1st), opponents’ batting average (.227, T-8th) and relief appearances (86, 7th).
Posted by Roberto Baly at 3:40 PM

That's a serious bummer for Bills and the Dodgers. He was really feeling it after his earlier DL stint this season -- pitching like the stud we all know he is -- and now he'll need to heal completely from this UCL mess before he pitches again next season.