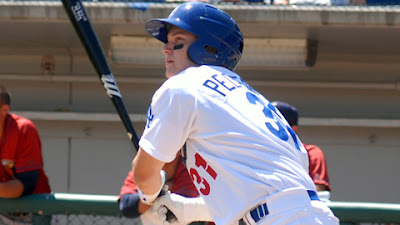 Ely, 26, was selected as the Triple-A Pacific Coast League’s 2012 Pitcher of the Year by vote of the league’s managers and media representatives and won the circuit’s Triple Crown with 14 wins (14-7, T-1st), 165 strikeouts and a 3.20 ERA in 27 starts with Albuquerque. The Illinois native was selected as both a midseason PCL All-Star and to the postseason All-PCL Team, also ranking among the league leaders in innings pitched (168.2, 2nd), opponents’ batting average (.238, 2nd) and WHIP (1.10, 1st).

Ely established Albuquerque franchise records with 14 wins, nine home wins and by winning six consecutive starts from July 23-Aug. 18. He recorded 18 quality starts and the team’s only shutout of the season, doing so in a 7.0-inning game in the first contest of an Aug. 8 doubleheader.

The Miami University (Ohio) product had his contract selected by the Dodgers on Sept. 1 and has made two relief appearances for the big league club this season. He was acquired by Los Angeles in a three-player trade with the White Sox on Dec. 17, 2009 and was originally selected by Chicago in the third round of the 2007 First-Year Player Draft.

Pederson, who was one of the youngest players in the California League this season at the age of 20, batted .313 with 26 steals, 26 doubles, four triples, 18 home runs and 70 RBI in 110 games for Single-A Rancho Cucamonga, ranking among the California League leaders in batting average (8th), on-base percentage (.396, 6th) and slugging percentage (.516, 9th). The Palo Alto native batted .336 with runners in scoring position and posted three hitting streaks of 10 or more games, including a season-high 15-game run from Aug. 10-25.

Pederson, a left-handed hitter, batted .328 in 65 games during the season’s second half and was one of the league’s top power hitters with 20 doubles (T-4th, California League) and 16 home runs (T-6th) after the All-Star break, including a three-homer game on July 1 against High Desert. He was honored as the California League’s Hitter of the Week for the period of Aug. 13-19, batting .440 (11-for-25) with four doubles, four homers and 10 RBI in six games.

The Dodgers’ 11th-round selection from the 2010 First-Year Player Draft is the son of former Dodger outfielder Stu Pederson, who appeared in eight games for Los Angeles in 1985, and recently appeared for Team Israel in its World Baseball Classic qualifier, batting .308 (4-for-13) with three steals and three runs scored in three games. Pederson was selected to play in the Arizona Fall League and next month will join other top prospects from throughout the league on the Mesa Solar Sox.

Both Ely and Pederson will be honored in an on-field pregame ceremony prior to tomorrow’s 7:10 p.m. Dodger game against the Colorado Rockies.

Branch Rickey Minor League Player and Pitcher of the Year: 1989-2011