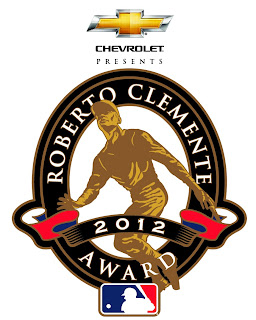 The Roberto Clemente Award presented by Chevrolet pays tribute to Clemente’s achievements and character by recognizing current players who truly understand the value of helping others. The Award is named for the 15-time MLB All-Star and Hall of Famer who died in a plane crash on New Year’s Eve 1972 while attempting to deliver supplies to earthquake victims in Nicaragua.

Kershaw and his wife Ellen recently founded their charitable foundation, Kershaw’s Challenge, in 2011 which believes in the transformation of at-risk children and communities through the benevolence and impact of others. Kershaw’s Challenge encourages people to use whatever God-given passion, purpose or talent they have been given to make a difference and give back to others in need. The cornerstone charity of the foundation is Arise Africa: Arise Africa with which the Kershaws partner to build and sustain Hope’s Home, an orphanage for children in Lusaka, Zambia.

“Striking out to Serve,” which began in 2011, continued this season with Kershaw donating $100 to Kershaw's Challenge for every batter he strikes out. “Striking out to Serve” in 2011 raised enough money for Kershaw’s Challenge to buy land and to build Hope’s Home. This year, money raised will furnish the orphanage, buy farmland and build a chicken coop.  Additionally, Kershaw’s Challenge is hoping to create an emergency fund since most of the children battle disease and infection related to HIV and AIDS.

In August, Kershaw hosted Clayton’s Texas BBQ and Hoedown, the inaugural fundraiser for Kershaw’s Challenge at Dodger Stadium which included a VIP reception, a concert by a Grammy-nominated country music artist, a silent and live auction, line-dancing, kids games and activities and authentic Texas BBQ. This first-time event raised more than $100,000 for Kershaw’s Challenge. Kershaw donated game-used and new equipment of his own for the silent auction and a clinic for 10 kids for the live auction.

This offseason, Kershaw plans to hold baseball clinics in his hometown of Dallas, Texas as additional fundraising for the foundation. Kershaw and Ellen will also make their annual trip to Lusaka, Zambia to visit and continue to help build Hope’s Home.

Kershaw co-authored a book with Ellen earlier this year titled Arise: Live Out your Faith and Dreams on Whatever Field You Find Yourself about their life together and trips to Africa. Funds raised from the book sales go directly to Kershaw’s Challenge for Hope’s Home in Africa.

In February 2012, Kershaw participated in the Dodgers’ annual Community Caravan, sorting and packing food for more than 400 families at the LA Regional Food Bank. In April 2012, Kershaw participated in a Habitat for Humanity project in South Los Angeles, helping to reconstruct a home for a family in need. In July 2012, Kershaw attended a teammate’s Video Game Party for kids from Reviving Baseball in Inner Cities (RBI) Los Angeles where he played video games with the youngsters, took photos and signed autographs. In August 2012, Kershaw spoke to youngsters at the annual Dodgers Dream Foundation Youth Baseball Camp at Dodger Stadium and took part in the Dodgers Dream Foundation Bowling Extravaganza. Kershaw also joined the first annual Dodgers Back-to-School Caravan in August where 4,000 backpacks were distributed to four local underserved schools. This month, Kershaw participated in Wednesday’s Child, a weekly television feature about adoption that helps find permanent, loving, adoptive families for children in foster care. Kershaw met a foster child on the field during batting practice.

Beginning today, fans are encouraged to participate in the process of selecting the national award recipient by visiting MLB.com/ClementeAward to vote for one of the 30 Club nominees. Participating fans will be automatically registered for a chance to win a trip to the 2012 World Series, where the national winner of the Roberto Clemente Award presented by Chevrolet will be announced. Voting ends at 11:59 p.m. ET on Sunday, October 14th, and the winner of the fan poll will receive one vote among those cast by a selection panel.

All Clubs playing at home today will recognize their local nominees as part of Roberto Clemente Day ceremonies, while each visiting Club will honor their nominees before another September home game. As part of the league-wide celebration, the Roberto Clemente Day logo will appear on the bases and the official dugout lineup cards.
Posted by Roberto Baly at 3:30 PM