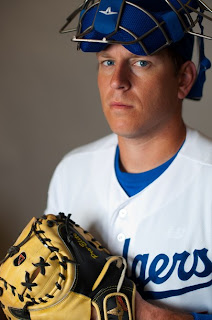 The Los Angeles Dodgers announced today that catcher A.J. Ellis was named the winner of the seventh annual Roy Campanella Award, which is given to the Dodger player who best exemplifies the spirit and leadership of the late Hall of Fame catcher. The award, which was voted upon by Dodger uniform personnel, will be presented to Ellis by Campanella’s daughter, Joni Campanella Roan, during pre-game ceremonies Saturday night.

The 31-year-old has been a steady presence behind the plate all season, ranking second on the club with 127 games played and fourth among Major League backstops with 125 games and 1,097.0 innings as a catcher. Ellis has also excelled at calling a game in his first season as a full-time starter, posting a 3.37 catchers’ ERA, the lowest mark among MLB catchers with at least 100 starts. He has thrown out 26 potential basestealers, the fourth-most among big league catchers, and committed just six errors, good for a .994 fielding percentage.

At the plate, the Missouri native leads Dodger qualifiers with a .365 on-base percentage (13th, NL) and has done the little things to help power the Dodger offense, working the count by seeing a big league-best 4.43 pitches per plate appearance, leading the club with 62 walks (13th, NL) and pacing the club’s position players with six sacrifice bunts. Ellis’ three walk-off RBI lead the team and his 11 home runs are his most at any level in his 10-year professional career, which include his first walk-off homer on May 26 against the Astros and his first grand slam on Aug. 29 at Colorado.

Ellis made his first Opening Day start this year in his fifth Major League campaign and was originally selected by the Dodgers in the 18th round of the 2003 First-Year Player Draft out of Austin Peay State University. Ellis and his wife, Cindy, have of two children, Ainsley and Luke, and have been active in the community, reading to local Glendale school children as a part of the Read Across America celebration during Spring Training and supporting his teammates charities by attending Clayton Kershaw’s Texas Hoedown and Dodgers Dream Foundation Bowling Extravaganza.

For the third consecutive year, the Dodgers Dream Foundation (DDF) will make a financial contribution to support the Roy and Roxie Campanella Physical Therapy Scholarship Endowment at California State University, Northridge (CSUN). In 2010, the DDF, CSUN and the Campanella family announced a partnership that will ensure the legacy of the Hall of Fame catcher for years to come. In addition to the endowment, the partnership also provides an internship opportunity within the Dodgers’ medical department each season for a student from the university’s physical therapy program.

He was inducted into the National Baseball Hall of Fame in 1969 and was among the first three Dodgers to have their uniform numbers retired alongside Jackie Robinson and Sandy Koufax. Campanella remained active in the Dodgers’ Community Relations Department until his passing on June 26, 1993 at the age of 71.
Posted by Roberto Baly at 10:00 PM