T.J. Simers tells Josh Beckett "This is the Rockies and you’re supposed to be a dynamo" 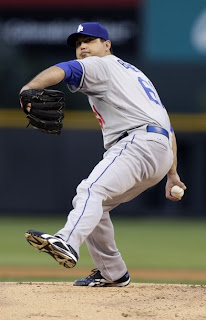 You can already imagine what was going to happen.


Did you ever think the ball would ever come down that first batter you faced?

What did you think at that moment, Dodgers debut, second pitch and …

“I thought I made a pretty [expletive] pitch. That’s what I was thinking.”

That’s your choice of words?

“No more than normal. I’m always nervous on start day.”

With rookies shouldn’t it be easier to pitch against them?

“If you make pitches, yeah.”

After giving up so many runs in the last three games did you feel like this was progress?

How’s that different than normal?

“You try and make the majority of them.”

I don’t understand your answer to my question. How’s that different from how you normally pitch?

“You’re going to have four or five pitches every game that you have to make and if you make the majority of them you usually pitch good.”

“No, you’re going to have situations where you have to make those pitches.”

So we’re talking triple and you have to make pitches to the next hitter at that point?

“No, I was talking about actually two of the pitches in that last inning, the same ones I keep referring to.”

What about that guy after the triple?

“I was trying to throw a fastball in and I didn’t get it in that far. That was one of the pitches.”

I’m trying to understand your mindset as you’re out there, a new Dodger, and the guy kills the ball off you like that.

“It happens. It’s the big leagues.”

“No, it’s not. I didn’t draw it up that way. It just happened. I had it going differently in my head.”

Did you? How did you have it happen?

“A weak ground ball would have been nice.”

So when the ball is leaving the park as quickly as it did, did you …

“Oh, he hit it too high. It didn’t even leave that fast.”

That didn’t do anything to you?

What did you learn about this team today, besides the fact they can’t score?

“They can score. I’ve seen them score. Since I’ve been here they’ve scored.”
Two runs?

Against the Marlins and Rockies?

Do you feel like this can be your type of team?

“I’ve been here for two days, I can’t answer that. I’m very happy to be here.”

Are you on your best behavior now?

This is what we’re always going to get?

So I can play this tape to you over again and again over the course of time?

And it will still work?

“I don’t promise anything.”

Then my tape is no good then.

I’m 61 years old, that’s the only tape I know how to use. I never figured out those [digital recorders]. You promised me if I didn’t win the game it would be a better column that it would be a better column and how I’m struggling a little bit. Shouldn’t you pick up a chair and throw it or something or do something? Because these guy have filled me in what you were like in Boston.

“Yeah, I threw a lot of chairs at them.”


Simers then goes on to a Boston radio station to discuss his meeting with Beckett. {linked here}
Posted by Roberto Baly at 9:30 AM

Easy Simers!!!! He's probably still upset that he was always picked last if ever at the playground. So he takes his frustration on athletes today. BTW no one reads the Times anymore.