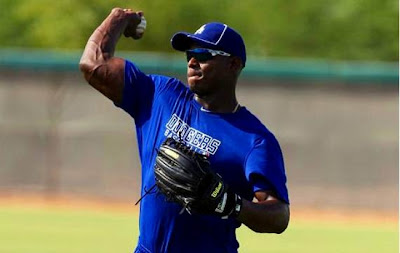 I was hospitalized when the Dodgers announced the signing of Puig. My dad was born and raised in Cuba so I'm always following Cuban ballplayers. If you're following me on Twitter, you know how big of a fan I am of Yoenis Cespedes.

From a Dodgers press release (June 29)

“Scouting and signing talent in Latin America is critical and this signing shows ownership’s commitment to reengage in the region and dedicate ourselves to getting stronger in this area,” said Colletti. “We feel that Yasiel can be an outstanding Major League player for the organization.”

“Yasiel is a fantastic kid with an infectious personality and we think he has the tools to be a frontline player in the Major Leagues,” said Dodger Assistant General Manager, Scouting Logan White. “He is very physical and athletic with raw power...he can hit it a long way. On top of that, he has a good arm and is an above average runner. We had a great team of people that worked to get this done and I’m proud of our staff.”

The speedy, strong-armed 21-year-old outfielder is expected to report to Camelback Ranch – Glendale in Arizona when he arrives in the United States.

And he killed Rookie ball in Arizona. {linked here}

On to Rancho Cucamonga?

The Dodgers just might have promoted Yasiel Puig to Rancho Cucamonga. Here's a tweet from sp11ke (former minor-leaguer):

"#Dodgers Yasiel Puig is in the stands here at Rancho Cucamonga. I guess his 1.500 OPS in 9 AZL games was enough."

It makes sense. The Dodgers wouldn't just randomly have Puig attend a game in Rancho from Arizona, so it's a safe assumption.

Nothing official but it does look like he will be with the Quakes soon.

Puig is in the 40-man roster but it is highly unlikely that he gets a September call-up.

Mike Scioscia's Tragic Illness has more on this.... {linked here}

And what of the bigs? I’m already getting questions on a regular basis about whether we’ll see Puig with the Dodgers this year, given their ongoing offensive difficulties, and while I understand the enthusiasm, I absolutely cannot see a scenario in which he goes from nine rookie league games to Rancho to getting at-bats in Los Angeles within a month, especially after his missed time. It just doesn’t happen, and though it’s fun to think about, it shouldn’t happen, at least not in terms of his development process. I suppose, given his position on the 40-man, that he could potentially join the team after the minor league year is done just to soak in the atmosphere and allow the big-league staff to get a closer look at him, but I just can’t see him in games in 2012.

The Dodgers held Bloggers night last month. (I just realized I never wrote about this) Ned Colletti was there and answering questions. I asked him why did Dodgers give Puig so much money ($42 million) than what the Cubs gave to another highly touted Cuban Jorge Soler. I don't think Colletti liked my question. He quickly said "Our people like Puig more".

Looking forward in seeing Puig play.
Posted by Roberto Baly at 9:00 AM

Nice job hitting Ned with that question Roberto! He probably never expected that.

BTW, it was nice seeing you on Saturday!