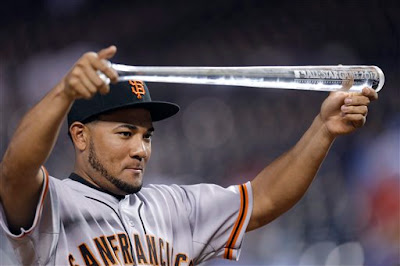 A huge blow for the Giants.


Giants left fielder Melky Cabrera, the second-leading hitter in the National League, was suspended for 50 games Wednesday by Major League Baseball for testing positive for testosterone, a performance-enhancing substance in violation of MLB's Joint Drug Prevention and Treatment Program.

The suspension, during which Cabrera will not be paid, is effective immediately.

"My positive test was the result of my use of a substance I should not have used," Cabrera said in a statement issued by the MLB Players Association. "I accept my suspension under the Joint Drug Program and I will try to move on with my life. I am deeply sorry for my mistake and I apologize to my teammates, to the San Francisco Giants organization and to the fans for letting them down."

Cabrera, 28, was batting .346, 13 points behind league-leader Andrew McCutchen of Pittsburgh.
The Giants, tied for first place in the NL West with the Dodgers as play began Wednesday, have 45 games regular-season games remaining.
Posted by Roberto Baly at 12:30 PM

Poor guy, I guess he should have been drinking his "MELK"!!

That's almost as good as the dodgers picking up another bat. At least he admitted his mistake you dont see that anymore