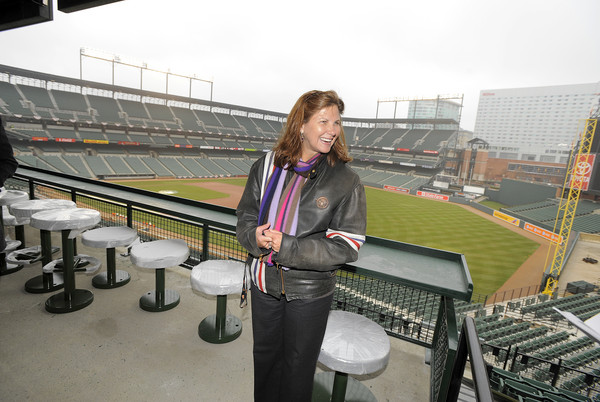 Smith, known throughout the sports world for her work with the Baltimore Orioles, Boston Red Sox and Atlanta Braves, joins the Dodgers immediately.  She most recently served as the Orioles Vice President of Planning and Development.

"Dodger Stadium is one of the most iconic venues in sports and Janet Marie is one of the few people I would trust with its future," said Kasten. "She respects baseball's tradition and knows how to retain a ballpark's distinctive charms while providing fans with the amenities and comfort they've come to expect. Any fan that has walked through the gates at Oriole Park at Camden Yards, the renovated Fenway Park or Atlanta's Turner Field has been a beneficiary of her understanding of what a ballpark means to its community. Every new baseball stadium built since 1992 has been influenced by what she helped build at Camden Yards.  And we thank Orioles owner Peter Angelos for allowing Janet Marie to join us."

In her new role with the Dodgers, Smith will oversee upgrades and enhancements to Dodger Stadium.
"I'm looking forward to working with the new Dodgers ownership to find ways to create an even better fan experience," said Smith. "Dodger Stadium is a treasured piece of the Los Angeles community and a special place where I watched more than a dozen games per season when I lived in L.A. during the early 1980s. It's important to all of us that we restore and enhance the park in a way that honors its heritage and highlights its distinctive appeals, while still capturing what fans want and franchises need in a modern venue."

Prior to rejoining the Orioles in 2009, Smith had spent seven years with the Boston Red Sox as Senior Vice President of Planning and Development, overseeing preservation of and improvements to historic Fenway Park and its surrounding neighborhood. In Atlanta, she held the positions of President of Turner Sports and Entertainment Development, a division of Turner Broadcasting System, and Vice President of Planning and Development for the Atlanta Braves, where she helped transform the 1996 Olympic Stadium into Turner Field for the Braves, and oversaw the development of the Philips Arena, home of the NBA Atlanta Hawks and NHL Atlanta Thrashers.

From 1989-1994, Smith worked with the Orioles as Vice President of Planning and Development overseeing the design and construction of Oriole Park at Camden Yards, which opened in 1992.  Camden Yards is considered the archetype for new ballparks and ushered in a wave of downtown ballfields that capture the warmth and appeal of classic older parks while offering comfortable, state-of-the-art facilities.

Smith holds a master's degree in urban planning from City College of New York and a bachelor of architecture degree from Mississippi State University.
Posted by Roberto Baly at 3:30 PM