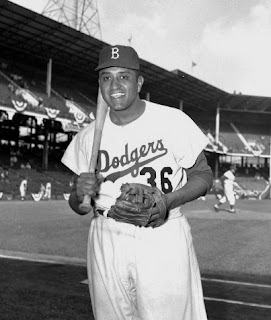 Former Dodger pitcher and current Special Advisor to the Chairman Don Newcombe will be presented with Major League Baseball’s Beacon of Hope Award at the MLB Beacon Awards Luncheon presented by Belk at 1:00 p.m. ET tomorrow at the Hyatt Regency Atlanta. Newcombe will be honored along with the founding members of Earth, Wind & Fire, who will receive the Beacon of Change Award, and Congressman John Lewis, who will receive the Beacon of Life Award.

“It's quite an appreciated honor and I am so happy to join all the former recipients of this prestigious award,” said Newcombe. “Surely, my thanks go out to my Los Angeles Dodgers, Commissioner Bud Selig and the selection committee for making it all possible.”

Newcombe is one of only two players in baseball history to win the Rookie of the Year, Most Valuable Player and Cy Young Awards, and also played alongside Hall of Famers Roy Campanella, Larry Doby and Jackie Robinson as the first African American pitcher in a Major League All-Star Game (1949).

The MLB Beacon Awards Luncheon is one of many events that will be held in the Atlanta area as a part of Delta Civil Rights Game Weekend, which includes the Civil Rights Game between the Dodgers and Braves tomorrow night. The 7:10 p.m. ET game at Turner Field will air locally on PRIME TICKET and nationally on MLB Network.  The game will feature special pre-game ceremonies recognizing the 2012 MLB Beacon Award recipients and on-field performances of patriotic songs.

The 2012 Delta Civil Rights Game and ancillary activities is the sixth installation of an annual event that began in Memphis in 2007, centering on an exhibition game between the St. Louis Cardinals and Cleveland Indians. After another exhibition game in Memphis in 2008, the Civil Rights Game and ancillary events moved to Cincinnati in 2009 and 2010 and Atlanta in 2011 as regular season contests. As home to many key leaders and organizations of the civil rights movement, and as a location for many of the movement’s grassroots activities, Atlanta played a critical role in this period of American history.
Posted by Roberto Baly at 3:00 PM

Mr. Newcombe is a true Dodger that all Dodger fans should celebrate. Thanks Roberto for posting about the event to honor him, hopefully some of the younger fans will search, check out video of Newk in action.