The 10th edition of Dodgers Playbill features a cover photo of Adrian Gonzalez’s epic home run in his first at-bat as a Dodger. Inside are features on Gonzalez, Andre Ethier’s record-tying 10 consecutive hits and Dodger Hall of Fame Broadcaster Vin Scully’s return to the booth for his 64th season in 2013. Also inside is information on tickets and upcoming promotions. Fans receive the Dodgers Playbill when they enter the Dodger Stadium parking gates. 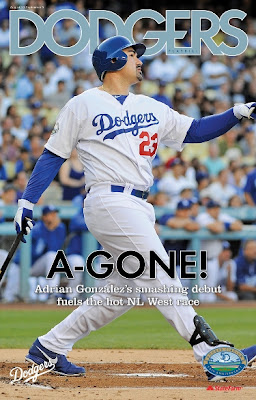