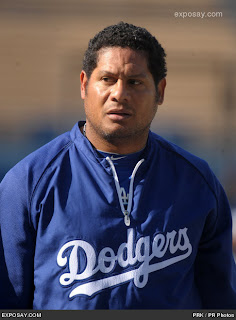 The Los Angeles Dodgers today designated outfielder Bobby Abreu for assignment as Shane Victorino was added to the active roster. Abreu was signed by the Dodgers as a free agent on May 4 and batted .251 with two home runs and 17 RBI in 70 games with Los Angeles, including a .316 batting average (6-for-19) and a .409 on-base percentage in 22 pinch-hitting appearances.

Victorino, who was acquired from Philadelphia yesterday in exchange for Josh Lindblom, Ethan Martin and cash considerations or a player to be named later, was added to the Dodgers active roster and is in today’s starting lineup, batting leadoff and playing left field. The 31-year-old will wear uniform No. 8 with Dodger Manager Don Mattingly switching to No. 12.
Posted by Roberto Baly at 10:45 AM