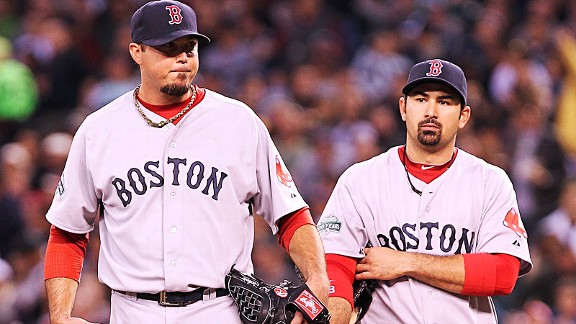 Can a deal be done? Wow!

Josh Beckett has also reportedly been claimed off waivers by the Los Angeles Dodgers, setting up an interesting 72 hours of talks between Boston and L.A.

The Dodgers claimed the right-hander on Friday, according to CSNNE.com's Sean McAdam, and FOX Sports' Ken Rosenthal later confirmed that report. That follows on the heels of the news that the Dodgers have also claimed Red Sox first baseman Adrian Gonzalez off waivers, meaning that both players could be headed West.

The Red Sox will have 72 hours to either work out a deal with Los Angeles, release Beckett without receiving compensation -- in which case the Dodgers will be on the hook for all of Beckett's remaining salary -- or revoke the pitcher's waivers and keep him. However, Beckett also has 10-5 rights, which means he could nix any prospective deal similarly to turning down a trade.

I'm against this. But then again, who are we going to give up? Or are the Dodgers just taking the big contracts? Should be a interesting weekend!
Posted by Roberto Baly at 2:30 PM