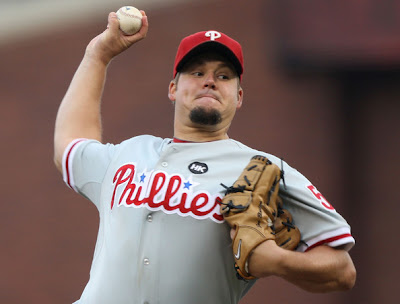 The Los Angeles Dodgers today acquired right-handed pitcher Joe Blanton from the Philadelphia Phillies in exchange for a player to be named later. Dodger General Manager Ned Colletti made the announcement.

Blanton was originally drafted by Oakland in the first round (24th overall) of the 2002 First-Year Draft after attending the University of Kentucky, where he led the SEC with 133 strikeouts in 2002. He and his wife, LeeAndra, live with their two daughters in Nashville.
Posted by Roberto Baly at 3:00 PM