It’s Friday Night Fireworks at Dodger Stadium July 13. At the conclusion of the game, fans are invited to go on the field to watch a Friday Night Fireworks show set to a soundtrack that includes music from artists who have performed at Dodger Stadium. A special message from legendary artist Sir Elton John, who performed at Dodger Stadium in 1975, will be part of Friday’s show. Prior to Friday’s game, James Loney will play host to a group from the Muscular Dystrophy Association (MDA) as part of the Loney’s Lounge community program. Each participant will receive a program T-shirt, meal voucher courtesy of Coca-Cola and will get to meet Loney on the field during batting practice. Stitch N' Pitch, bringing together two traditions, baseball and the needle arts, will be on hand. Stitch N' Pitch fans will be knitting, crocheting, embroidering, cross-stitching and needlepointing while also enjoying the game. Vocal band and South African natives Overtone will perform the national anthem and “God Bless America.” They are featured in the cast of E! Network’s “Mrs. Eastwood and Company” having been discovered by Clint and Dina Eastwood in 2009. 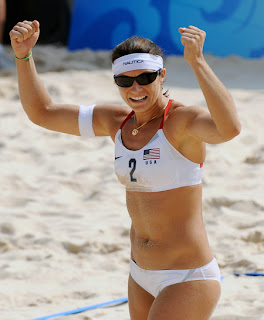 Two-time Olympic gold medalist and professional beach volleyball player Misty May Treanor will throw the ceremonial first pitch. Misty and Dodger catcher Matt Treanor have been married 8 years. Dodgers honor a Veteran of the Game at every home game by treating them to Field Level tickets, a batting practice experience and recognizing them on the field during pregame ceremonies. The Veteran of the Game is U.S. Navy Petty Officer 1st Class Sergeant Steven Escujuri of West Covina. The Dodgers’ Public Relations department will hold its fifth annual “Blogger Night” and more than 20 of the regular Dodgers bloggers will be hosted in a suite to watch the game. Refreshments will be provided and several special Dodger guests are slated to visit, including Dodger President and CEO Stan Kasten and General Manager Ned Colletti.

*Hopefully I can make it! 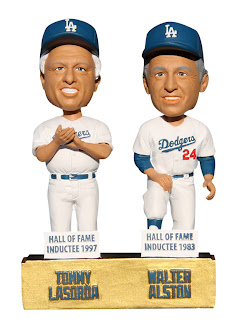 Saturday is Tommy Lasorda & Walter Alston Bobblehead Night presented by Bank of America. The sixth bobblehead in the Dodger Stadium Greats Bobblehead series brings together 3,639 wins, six World Series championships and two Hall of Famers with managers Tommy Lasorda and Walter Alston. It will mark the third time that Lasorda has been depicted on a Dodger Stadium bobblehead and Alston’s first. Fans with the first 50,000 tickets will receive a Lasorda & Alston bobblehead. Walter Alston’s grandson, Rob Ogle, will throw the ceremonial first pitch.

Dodger outfielder Andre Ethier will meet with a group from Arizona State University during batting practice. Ethier played on ASU’s baseball team for two seasons in 2002 & 2003.

The Veteran of the Game is U.S. Navy Lieutenant Oscar Flores of Los Angeles. Flores has served more than nine deployments overseas and is most proud of aiding the Gulf Coast in recovery after Hurricane Katrina in 2005 and assisting in relief efforts for Japan after the 2011 tsunami.

Fans with the first 30,000 tickets will receive a MLB Network Drawstring Bag. Viva Los Dodgers Day, presented by State Farm, Chevrolet and Time Warner Cable, is a season-long initiative in its third year and celebrates Latino culture in Los Angeles at a family-friendly pregame festival held in lot 6 two hours prior to each Sunday's game. This Sunday, Viva Los Dodgers Day begins at 11 a.m.The Boogaloo Assassins, a group whose styling is influenced by the Latin soul sounds of Spanish Harlem, and Mariachi Los Solecitos will perform. This Sunday’s event also includes a classic car show courtesy of Sanctiond automotive car care and lifestyle products. GoGo squeeZ, the first squeezable, re-sealable, all-natural applesauce snack in the U.S., will bring “Pass the Play” a mobile playground. Dodger pitcher Aaron Harang will host military families as part of Aaron’s Aces which occurs every Sunday home game. Harang’s guests receive game tickets, complimentary parking and meal vouchers courtesy of Coca-Cola. The group also gets a meet and greet on the field with Harang along with an autographed Aaron’s Aces t-shirt. It is Jewish Community Day. Dodger yarmulkes are sent to fans upon purchase of this event ticket and the day features kosher food at select concession locations. Matisyahu will perform two songs, “Sunshine” and “One Day,” as part of pregame ceremonies and will also throw the ceremonial first pitch. Matisyahu’s new album “Spark Seeker” will be released on July 17. This is the Dodgers’ 13th annual Jewish Community Day. Representatives from SoldierCare, a non-profit organization dedicated to supporting and mentoring young wounded veterans, will throw out the first pitch. Master Sergeant Sean Sargeant of San Diego, Corporal Jacob Farquar of Newcastle, IN, Corporal Isiah Huesman, Corporal Michael Spivey of Abilene, TX, Sergeant James Bane of Celina, TN and Lance Corporal Ethan Mead of Edinburgh, IN will be representing Marines Wounded Warrior Battalion, Camp Pendleton in addition to Army representatives Sgt. Rick Yarosh of Windsor, NY and Sgt. Chris DeVinny of Grand Junction, CO. State Farm, a proud partner of the Los Angeles Dodgers and Major League Baseball, has teamed up with the Dodgers to recognize organizations that provide local support to communities throughout the Greater Los Angeles areas.  On Sunday, Maryvale will be recognized in pregame ceremonies. Based in Rosemead, CA. Maryvale provides a circle of care for children and their families in four distinct ways: Family Resource & Early Education, Mental Health Services, Residential Based Services and Transitional Housing and After Care. The Veteran of the Game is U.S. Army Chief Warrant Officer Julio Dominguez of San Fernando. Dominguez just returned home from a deployment in Afghanistan. Following Sunday’s game, first baseman James Loney will host a video game party in the 1st Base Prime Ticket Club for youth from Boys & Girls Club of Venice RBI. Prior to the event, Loney’s group will be watching the game from the Field level. The Dodgers Dream Foundation will provide the televisions, video game consoles, games and T-shirts for the youth attending and refreshments for all participants. The Loney's Lounge Video Game Party is a community initiative started by the first baseman where he invites several of his teammates to join the group of kids from Reviving Baseball in Inner Cities (RBI) program in Los Angeles. The event is in its fifth season and was created by Loney, who is an RBI alumnus and an active gamer. The Dodgers’ Digital Series continues with a day for social media active moms that will receive a behind-the-scenes look into family-friendly offerings at Dodger Stadium. The Dodgers’ Digital series is a social media experience that aims to engage fans online, in-stadium and at home. Fans can apply for the Dodgers’ Digital Series by visiting http://bitly.com/dodgerds.
Posted by Roberto Baly at 9:00 PM