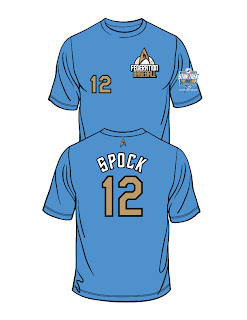 The Dodgers will present the first ever Star Trek Night at Dodger Stadium on Friday, August 3 (7:10 p.m. vs. Chicago Cubs).

The night will celebrate the Blu-ray debut of popular sci-fi favorite STAR TREK: THE NEXT GENERATION – SEASON ONE, which was released today by CBS Home Entertainment. The series marks its 25th anniversary in 2012, and continues to enthrall fans with its exciting and socially relevant tales of space exploration in the 24th century.

Fans are encouraged to dress in their favorite Star Trek costumes, and Friday Night Fireworks on August 3 will be set to Star Trek-themed music.

Fans can purchase tickets to Star Trek Night on August 3 by visiting www.dodgers.com/startrek or by calling 866-DODGERS.
Posted by Roberto Baly at 1:30 PM