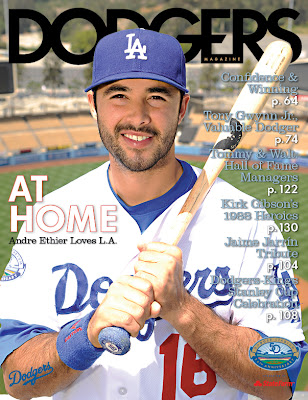 The July edition of Dodgers Magazine features a cover photo of Andre Ethier at the top of Dodger Stadium. Inside is a feature on Ethier, who has befriended fellow Arizona State baseball player Cory Hahn, the young man who was paralyzed from the chest down on a stolen base attempt in just his second game for the Sun Devils. Also in this edition are features on Tony Gwynn Jr., Matt Treanor, Dodger Hall of Fame managers Tommy Lasorda and Walter Alston and a first-person account by Kirk Gibson on his historic home run in Game 1 of the 1988 World Series. Fans can purchase Dodgers Magazine at merchandise stands throughout Dodger Stadium or they can order subscriptions at www.dodgers.com/magazine.
Posted by Roberto Baly at 12:30 PM