Oh not sure about this. Good luck Josh Lindblom and Ethan Martin. 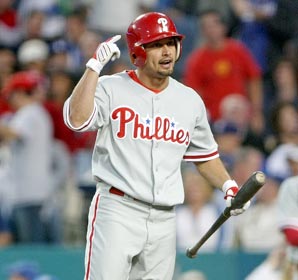 
So we're trading away Lindblom and Martin for a rental? Victorino is a free-agent at the end of the season. Plus Victorino is not having a nice year. .324 OBP? {linked here}

By the way, I can care less what Victorino has done to us before. He's with the Dodgers now, deal with it. I just don't like this trade.

Dodgers made it official....

“We’re excited to add an All-Star caliber player with postseason experience,” said Colletti. “He plays the game with passion, gives us a top of the order bat from both sides of the plate, can steal bases and is solid defensively in the outfield.”

Victorino was originally selected by Los Angeles in the sixth round of the 1999 First-Year Player Draft before he was lost to San Diego (2002) and then Philadelphia (2004) in the Rule 5 Draft.

Lindblom, 25, has gone 2-2 with a 3.02 ERA in a team-leading 48 relief appearances this season. The Indiana native is in his second Major League season after being selected by the Dodgers in the second round of the 2008 First-Year Player Draft out of Purdue University.

I have a feeling they would have spoke with Victorino before they made that move and got a commitment from him that he would like to stay in LA.

These guys are professionals. They dnt hold a grudge. With that said I would have preferred Hunter Pence

Sad to see Ethan Martin go. I had hopes for him to pan out. Good luck to them.