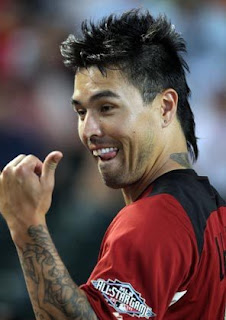 League was 0-5 with a 3.63 ERA (18 ER/44.2 IP) and nine saves in 46 games for the Mariners this season, striking out 27 batters and allowing just one home run. The Sacramento, CA native was named to the American League All-Star team in 2011 and went on to save 37 games for Seattle last year.

League’s 37 saves in 42 chances last year ranked third in the American League and tied for fourth on the Mariners’ all-time single-season saves list. The 29-year old hurler recorded 14 consecutive saves from May 18-July 4, 2011. His 88.1 save percentage was the sixth highest in Mariners’ history.

Since his first season in 2004, he owns a ground-ball percentage of 74.4, which ranks eighth in the Major Leagues among qualifying relievers. Additionally, right-handers are batting just .225 against him over the course of his career and overall he has limited hitters to a .252 career batting average.

The 6-foot-2, 210-pounder was named to the AL All-Star team in 2011 and pitched the seventh inning in Arizona. League was also part of the no-hitter against the Dodgers on June 8 at Safeco Field. The right-hander recorded the last two outs of the eighth inning, stranding runners on second and third.

League was originally selected by the Toronto Blue Jays in the second round (59th overall) of the 2001 First-Year Draft. League attended high school in Honolulu, HI and was the 2001 Gatorade Hawaii Player of the Year.

Landry, 22, has spent the entire season at Single-A Rancho Cucamonga where he entered action tonight hitting .328 with eight homers, 51 RBI and 20 stolen bases in 80 games. Landry was selected in the third round of the 2010 First-Year Draft.

Bawcom, 23, was taken in the 17th round of the 2010 draft and entered tonight’s play having appeared in 39 combined games for Double-A Chattanooga and Single-A Rancho Cucamonga. The Texas native had a total of 20 saves and posted a combined 2.03 ERA for the two clubs in 2012.
Posted by Roberto Baly at 7:00 AM