Andre Ethier is scheduled to play at Rancho Cucamonga 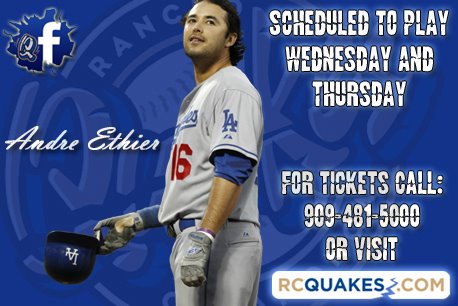 From the Rancho Cucamonga Quakes -

Dodgers' outfielder Andre Ethier, who's been on the Dodgers' DL retroactive to June 28th with a strained left oblique, is scheduled to be in uniform for the Quakes on both Wednesday and Thursday, as they host the Inland Empire 66ers in the first two games of a three-game home stand.

Ethier, who's batted .291 with ten homers and 55 RBIs in 75 games for the Dodgers, is expected to play for the Quakes for two games, then potentially, rejoin the Dodgers when the club returns to action from this week's all-star break.

Wednesday night is another Terra Vista Animal Hospital Bark in the Ballpark, as fans are encouraged to bring their four-legged friends to The Epicenter. Thursday is another Buffalo Wild Wings Thirsty Thursday, as fans will enjoy $2 domestic 16-oz drafts and $2 24-oz Pepsi products. Game time for both nights is 7:05pm from The Epicenter.

Tickets are still available for both games but are moving quickly. They can be purchased online at rcquakes.com, over the phone at (909) 481-5000 or by visiting the Quakes' Ticket Office at The Epicenter.

We hope to see you at The Epicenter this week...Go Quakes!
Posted by Roberto Baly at 11:00 AM