What's going on at Dodger Stadium for the three game series against the Angels? 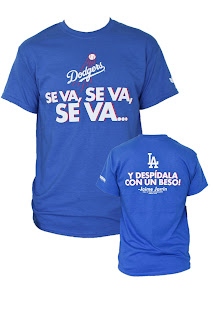 Hall of Fame Dodger broadcaster Jaime Jarrín, now in his 54th season as “the Spanish Voice of the Dodgers,” will be honored as part of the club’s season-long celebration of Dodger Stadium’s 50th Anniversary. Fans with the first 30,000 tickets Monday will receive a Jaime Jarrín T-Shirt featuring an excerpt of Jarrín’s famous home run call “¡Se va, se va, y se fue… despidala con un beso!” Jarrín has called more than 8,200 regular season games, 25 MLB All-Star games, more than 100 postseason games and 20 World Series during his more than half century with the Dodgers.

The Jarrín Dodger legacy now spans three generations as his son Jorge is in his first season as play-by-play announcer in Spanish for PRIME TICKET and his grandson Stefan played for the champion Arizona League Dodgers last season after being selected by the club in the 40th round of the 2011 draft. All three Jarríns will throw a ceremonial first pitch. A special pre-game and in-game tribute featuring Jarrín’s friends and colleagues from throughout baseball will be part of Monday’s celebration as well as an on-field presentation by Univision anchors and executives.

The Veteran of the Game is United States Army Private First Class Bea Cohen, a World War II veteran and the oldest living veteran in California at age 102. Having enlisted in 1942, Cohen has spent more than 70 years serving the United States and supporting the American military. She played on a women’s baseball team in the U.S. Army during World War II.

Wednesday concludes the Interleague series against the Los Angeles Angels of Anaheim and is Filipino Heritage Night at Dodger Stadium. The Philippine Chamber Singers - Los Angeles (PCS-LA) will perform as part of pre-game ceremonies and Becca Godinez will perform the national anthem.

The Veteran of the Game is U.S. Navy HM2 Daniel Jacobs of Oakland. Daniel “Doc” Jacobs, a Navy corpsman, has served in the U.S. Navy for more than seven years. “Doc” joined 3rd Battalion 7th Marines prior to their deployment to Ramadi, Iraq in September 2005.  Doc was in combat for six and a half months on a seven-month deployment when his gun truck was struck by an I.E.D (improvised explosive device). After two years of recovery, which included losing his left leg, “Doc” returned to the Fleet Marine Force and is the only amputee in the Fleet Marine Force for the U.S. Navy and is the first amputee Corpsman and Naval Personnel to ever be assigned to an infantry unit.
Posted by Roberto Baly at 3:00 PM