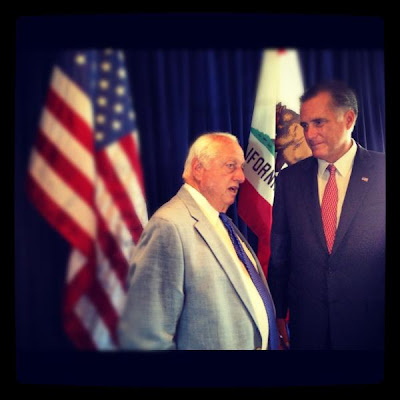 Mitt Romney, raising money in Riverside on Friday, acknowledged during his plea to donors the implausibility in winning California in the general election.

“You gotta vote, and I know you’re going to vote. But I know that California is a hard state for a Republican to win,” he told about 300 supporters at a luncheon at a golf course. “If I won California, why, we’ve won in a landslide, you know that? So, I’m hoping to win California, but I’m aiming to win in those key swing states, and one of the things you can do is help people help me.”

Romney made his remarks at the Victoria Club, a golf course and country club in the Tequesquite Arroyo. Donors dined on green salad and chicken. Among those attending was longtime Los Angeles Dodgers’ manager Tommy Lasorda.

Green salad and chicken? Boring.
Posted by Roberto Baly at 6:00 AM

I love Tommy, and for his own sake I hope he keeps eating chicken and salad until he drops some weight. He is way too heavy these days.