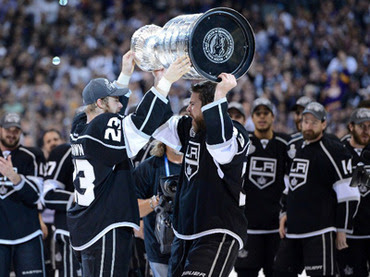 The Los Angeles Kings, who last Monday night were crowned Stanley Cup champions for the first time in franchise history, will bring the Stanley Cup trophy from STAPLES Center to Dodger Stadium. Prior to today's 7:10 p.m. game against the Los Angeles Angels of Anaheim, the Stanley Cup champions will join both the Dodgers and the Angels on the field for a special team photo. Members of the Kings team will then throw out today's ceremonial first pitch to the first-place Dodgers.