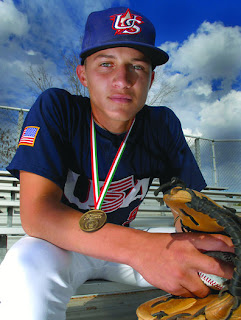 The Dodgers sent out this press release last night -

Seager, a 6-foot-4, 205-pounder, batted .519 with 10 home runs and 37 RBI this season to earn a selection as the Gatorade North Carolina Baseball Player of the Year. The 18-year-old also stole 13 bases while posting a 1.062 slugging percentage and a .664 on-base percentage. The younger brother of Mariners third baseman Kyle Seager was rated by Baseball America as the top third baseman in the 2012 draft.

“We’re excited to have taken a quality young man,” said White. “He’s athletic, can hit and comes from a great family with the bloodlines we look for.”

Seager was selected for the 2010 USA Baseball 16-and-Under National Team and earned All-Tournament honors by helping Team USA win a gold medal at the Pan-American Games, batting .514 with a home run and 12 RBI in nine games.

Los Angeles drafted a position player with its first selection for the first time since taking James Loney with the 19th overall pick in 2002.

Valentin, 18, is the son of former Dodger infielder Jose Valentin, who played 16 Major League seasons, including the 2005 campaign with Los Angeles. The 5-foot-10, 175-pound switch-hitter was a 2011 Under Armour All-American and Baseball America’s top-rated second baseman heading into the draft.

Below are the Dodgers’ first-round selections since the start of the draft in 1965: