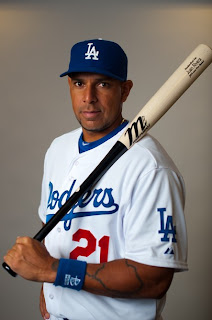 Rivera, who has been on the disabled list since May 9 with a left hamstring strain, batted .250 (3-for-12) with two home runs and five RBI in four rehab games with Triple-A Albuquerque and Single-A Rancho Cucamonga, last playing on Thursday with the Quakes. The 33-year-old is batting .247 with two home runs and 13 RBI in 25 games with the Dodgers this season, including 13 starts in the outfield and seven at first base.
Posted by Roberto Baly at 12:00 PM

It happens. We'll see Van Slyke again soon. When you are paying a player $4M to play, you can't keep him out of the lineup any longer than you have to.