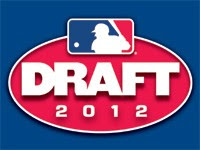 Through the first two days of the draft, the Dodgers selected eight pitchers (six right-handers, two left-handers), five infielders and three outfielders. The club used nine picks on college players, selected six out of high school and one that was not affiliated with a school program.

The Dodgers used consecutive picks on left-handed pitchers to open the draft’s second day, taking Steven Rodriguez from the University of Florida with their second-round pick (82nd overall) and 22-year-old Cuban Onelki Garcia with their third-round selection. Rodriguez, a 21-year-old junior, went 3-2 with four saves and a 2.08 ERA, limiting opponents to a .203 batting average with 79 strikeouts in 60.2 innings for the Gators this season. Garcia last pitched for Ponce in the Puerto Rican League this winter, posting a 0.84 ERA (1 ER/10.2 IP) in three starts, and previously pitched three professional seasons for Guantanamo in Cuba, going 12-12 with a 4.73 ERA.

The Dodgers selected Texas A&M senior right-hander Ross Stripling with their fifth-round pick. The 22-year-old went 10-4 with five complete games, including a no-hitter against San Diego State on May 12, and a 3.08 ERA in 16 starts this season. As a junior in 2011, Stripling led the country with 14 wins, garnering All-America honors from American Baseball Coaches Association/Rawlings (First Team), Collegiate Baseball (Third Team) and College Baseball Insider (Honorable Mention).

In the sixth round, the Dodgers selected Mountain Pointe High School (Ahwatukee, AZ) outfielder Joey Curletta, who batted .340 with 12 doubles, four homers and 26 RBI as a senior in 2012. Curletta, a 6-foot-4, 225-pounder, was selected to the ESPNHS All-State team for Arizona prior to his senior season after helping to lead Mountain Pointe to a 5A-I state championship as a junior with a .420 average, 21 homers and 57 RBI in 112 at-bats.

Los Angeles selected UCLA closer and Alamo, CA resident (San Ramon Valley High School) Scott Griggs in the eighth round. As a 21-year-old junior this season, Griggs established the school's single-season saves record (15), going 3-1 with a 2.70 ERA and limiting opposing hitters to a .172 batting average with 64 strikeouts in 36.2 innings in 35 relief appearances.