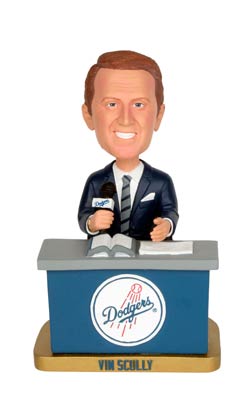 Hall of Fame Broadcaster Vin Scully will be featured on the club’s final bobblehead night on Aug. 30 when the Dodgers take on Arizona at 7:10 p.m. Entering an unprecedented 63rd season broadcasting the Dodgers, Scully’s 62 years of consecutive service with the Dodgers is the longest of any sports broadcaster with one team. This marks the Hall of Famer’s first-ever Dodger Stadium bobblehead and it will be given out to fans with the first 50,000 valid tickets.

Fans can purchase tickets to this game through a season ticket plan or the 10-game Flex Plan with tickets starting at $11 by visiting dodgers.com/promotions. Individual tickets will not be made available to the general public.

It's crap that fans who can't afford a 10game plan might lose out. Way to snub those who bleed blue and don't have enough green!

What a sweet freakin' bobblehead!

"Individual tickets will not be made available to the general public."

That's what they tried to do with the Yankees series and I went to both games. They'll release individual tickets when the day comes closer.

Try stub hub if all fails, might be overpriced but well worth it..good luck..

Individual tickets will eventually go on sale, but season ticket holders and mini plan holders will be given a first chance at picking up extra tickets before the general public is able to buy their tickets.

I noticed some people on craigslist were offering 20 dollar top deck seats for Scully and Koufax night a while back. Not sure if they are still at that price, but it beats stub hub prices.

Either way if you have held out this long and you haven't got your Scully or Koufax tickets, don't expect 10 dollar td seats or 17 dollar lfp seats at this point. The longer you wait odds are the more expensive the game will be, and don't expect those bobbleheads to go cheap on ebay.