What's going on at Dodger Stadium for the four game series against the Milwaukee Brewers? 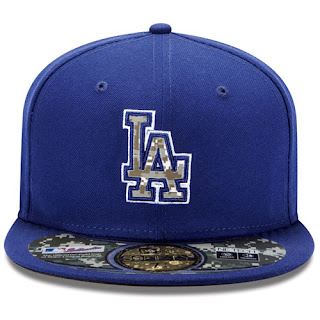 Major League Baseball unveiled the 2012 Stars & Stripes caps, which will be worn by all clubs including the Dodgers on Memorial Day (May 28) and Independence Day weekend (July 4) as part of Major League Baseball’s fifth consecutive year of national fundraising and awareness initiatives for Welcome Back Veterans, a program which addresses the needs of returning American Veterans and their families. With the support of Major League Baseball and its clubs, Welcome Back Veterans since 2008 has awarded more than $11 million in grants to more than 30 non-profit agencies across the country targeting veterans’ greatest needs.

This year, the caps will remain in each team’s official color, but a digital camouflage appliqué will fill the logo on the front of the cap. These MLB Authentic Collection caps, produced by New Era, are available for sale to the public at MLB.com. MLB Properties, Inc. and MLB.com each will donate all of their respective net proceeds received from the sale of the caps to Welcome Back Veterans.

Welcome Back Veterans is an MLB Charities initiative in partnership with the McCormick Foundation and the Entertainment Industry Foundation. The program is supported by Major League Baseball Advanced Media and MLB Network. Additional information on Welcome Back Veterans can be found at www.WelcomeBackVeterans.org.

The national anthem and “God Bless America” will be performed by United States Air Force Reserve Staff Sergeant DeJon Fruga from March Air Reserve Base. A Joint Services Color Guard will accompany the national anthem performance. United States Marine Corps Sergeant Michael Mejia will throw out the ceremonial first pitch. A United States Marine since 2003, Mejia served two deployments in Iraq and one in Afghanistan. Making a full recovery after stepping on an improvised explosive device (IED) in combat operations, Mejia spent seven months in the hospital in recovery and is now back on full duty as platoon Sergeant.

Four pre-selected youngsters of military families will participate in Kids Take the Field prior to Monday’s game. 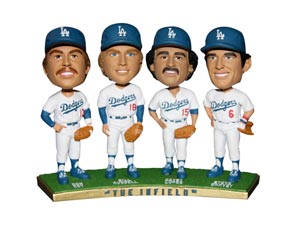 The record-setting Dodger infield of Steve Garvey, Davey Lopes, Bill Russell and Ron Cey that played together from 1973-81 is reunited for the third bobblehead in the Dodger Stadium Greats Bobblehead series Tuesday. The group combined for 21 All-Star appearances during their time together, leading the Dodgers to four National League pennants and a World Series championship in 1981. This is the first Dodger Stadium bobblehead for Lopes and Russell and the second for Garvey and Cey. Fans with the first 50,000 valid tickets will receive “The Infield” bobblehead presented by State Farm.

“The Infield” – Garvey, Lopes, Russell and Cey – will throw out the ceremonial first pitch and start Tuesday’s game with “It’s Time for Dodger Baseball.” Lowell Bassett, who has performed the national anthem each season for the past 37 years, will perform the national anthem and “God Bless America.”

The Veteran of the Game is United States Army Staff Sergeant Samantha Sanchez, a 12-year veteran of the US Army Reserve and California Army National Guard, of Benicia, CA, who has served several deployments including to Iraq.

Dodger first baseman James Loney will host a group from the Muscular Dystrophy Association prior to Wednesday’s game as part of Loney’s Lounge. Participants receive a program T-shirt, meal voucher courtesy of Coca-Cola and a meet and greet on the field during batting practice with Loney.

The 2012 MLB Breaking Barriers Dodgers’ contest winner Trinity Harper, a 5th grader from Morgan Kincaid Preparatory School in Victorville, and her teacher, Michelle Diggs, will be recognized on the field as part of pre-game ceremonies Wednesday.

The 2012 MLB Breaking Barriers national and club winners have been selected from nearly 6,000 entries. Breaking Barriers: In Sports, In Life was developed by Major League Baseball, Sharon Robinson and Scholastic, the global children’s publishing, education and media company. The Breaking Barriers essay contest asks students in grades four through nine to submit an essay about barriers or obstacles they have faced or are still facing in their lives, and how they overcame those obstacles using one or more of the values demonstrated by Jackie Robinson: commitment, citizenship, courage, determination, excellence, justice, persistence, teamwork and integrity. Since its inception in 1997, Breaking Barriers: In Sports, In Life has reached more than 22 million children and 2.9 million educators in the continental United States, Canada and Puerto Rico. 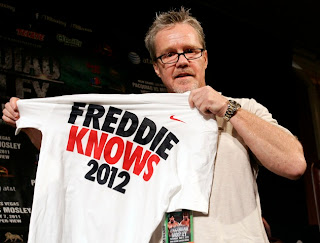 World Boxing Hall of Famer Freddie Roach will throw out the ceremonial first pitch. Roach is a boxing trainer and a former professional boxer. One of the most well-known boxing trainers in the world, having been voted Trainer of the Year by the Boxing Writers Association of America in 2003, 2006, 2008, 2009 and 2010, Roach is currently the boxing coach of eight-division world champion Manny Pacquiao, former world champion Amir Khan and current WBC Middleweight Champion Julio César Chávez, Jr., just to name a few.

Following the first pitch, Roach will join the Dodgers Spanish-language broadcast team – Hall of Famer Jaime Jarrín, Pepe Yñiguez and Fernando Valenzuela – as a special guest on the Univision Radio KTNQ 1020 AM radio broadcast during the first inning of Wednesday’s game.

Dodger Jerry Hairston Jr. will launch his community program, Hairston’s Heroes, before Thursday’s game. Throughout the season, Hairston will host youngsters from local Boys and Girls Clubs. Thursday’s group is visiting from the Boys and Girls Club of San Fernando Valley. The kids will receive a T-shirt, meal voucher courtesy of Coca-Cola and a meet and greet on the field during batting practice with Hairston.