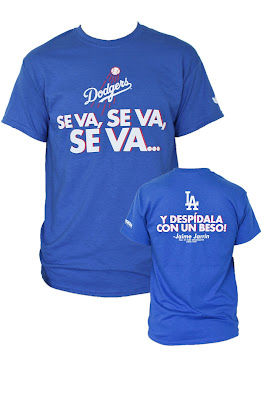 The Los Angeles Dodgers announced today that Hall of Fame Dodger broadcaster Jaime Jarrín now in his 54th season as “the Spanish Voice of the Dodgers,” will be honored as part of the club’s season-long celebration of Dodger Stadium’s 50th Anniversary. Jaime Jarrín T-Shirt and Tribute Night presented by Univision Radio is set for Monday, June 11 when the Dodgers take on the Angels at 7:10 p.m. The first 30,000 fans with valid tickets for the June 11 game will receive a Jaime Jarrín T-Shirt, whose design was unveiled today. The t-shirt features an excerpt of Jarrín’s famous home run call “¡Se va, se va, y se fue… despidala con un beso!”

Jarrín precedes the establishment of Dodger Stadium, having called games while the Dodgers played at the L.A. Coliseum upon the club’s move to Los Angeles from Brooklyn. For seven different decades, the Hall of Famer has been the Spanish-language storyteller of the Los Angeles Dodgers’ greatest moments for countless Dodger fans and families.

“The Dodgers and our fans are extremely fortunate to have Hall of Famer Jaime Jarrín as our voice in Spanish,” said Dodger owner Earvin “Magic” Johnson. “Jaime is a Los Angeles icon, one who has inspired several generations of Los Angeles Latinos to dream big. He’s been instrumental in instilling a love of Dodger baseball throughout the Los Angeles area. We salute Jaime, a Dodger institution, and are grateful for all that he has given to the Dodgers and to Dodger fans.”

A native of Ecuador, Jarrín arrived in the U.S. on June 24, 1955, the same year that Dodger great Sandy Koufax made his Major League debut. Jarrín had never seen a baseball game until he moved to Los Angeles. His first experience with baseball involved watching the Dodgers on a televised broadcast in 1955 when they won their first World Series championship by defeating the New York Yankees.

Jarrín began regularly attending minor league games in Los Angeles, visiting both Gilmore Field and Wrigley Field from 1955 until the Dodgers moved to Los Angeles in 1958 in order to learn the game. Jarrín was given one year to prepare to become a baseball broadcaster by William Beaton, the station manager at KWKW. During his first six years with the Dodgers, Jarrín and his partner would recreate the games in the studio while listening to fellow Hall of Famer Vin Scully and Jerry Doggett on the radio.

Jarrín is a pioneer in Spanish-language sports broadcasting and as such has collected numerous other accolades, including the first Southern California Sports Broadcasters Association's President's Award, a star on the Hollywood Walk of Fame, the highest award from the National Association of Hispanic Journalists, induction into the Southern California Sports Broadcasters’ Hall of Fame, and its foreign-language broadcaster of the year award and Golden Mike Awards. Last year, Jarrín was honored by the American Federation of Television and Radio Artists (AFTRA) Foundation with an AFTRA Media and Entertainment Excellence Award and was the Hall of Fame recipient for the Associated Press Television-Radio Association (APTRA).

One of Jarrín’s favorite memories was Opening Day 1981, when rookie pitcher Fernando Valenzuela took the mound, the start of “Fernandomania.” Jarrín served as Valenzuela’s interpreter for several years and the All-Star pitcher is now an analyst alongside Jarrín and Spanish-language broadcaster Pepe Yñiguez on Univision Radio’s 1020 AM KTNQ. Univision Radio is the presenting sponsor for Jaime Jarrín T-Shirt and Tribute Night on June 11.

The Dodger legacy for Jarrín now spans three generations in his own family as his son Jorge is in his first season as play-by-play announcer in Spanish for PRIME TICKET and his grandson Stefan played for the champion Arizona League Dodgers last season after being selected by the club in the 40th round of the 2011 draft. Jarrín remains connected to his native Ecuador, presently funding a baseball academy in Guayaquil for kids between the ages of 7 and 12 with the help his friends and colleagues across MLB, with hopes of growing the sport in Ecuador.

Special tribute are planned prior to and throughout the game on June 11 versus the Angels. Fans can purchase tickets to attend Jaime Jarrín T-Shirt and Tribute Night by visiting www.losdodgers.com/boletos or www.dodgers.com/promotions.
Posted by Roberto Baly at 8:00 AM