It's official - New ownership takes over 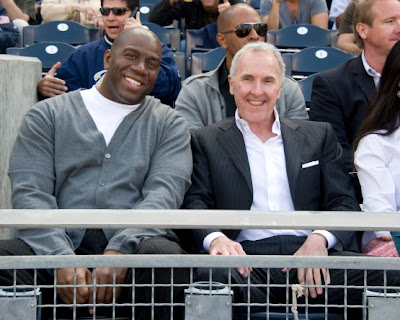 I'm not going to waste my time and start attacking Frank McCourt. It seems that's what everyone is doing when news broke that he no longer owns the Dodgers. I'm just glad it's over and hope the new ownership takes this seriously.

From Bill Shaikin of the L.A. Times {linked here}

Frank McCourt surrendered ownership of the Dodgerson Tuesday, closing a turbulent chapter in the history of one of baseball’s most historic franchises.The new owners wired the final payment on the record $2.15-billion purchase price on Tuesday, closing the transaction that ended the McCourt era and ushering in Guggenheim Baseball as the Dodgers’ third owner since the O’Malley family sold the team in 1998, individuals close to the negotiations confirmed.The new ownership group, fronted by Magic Johnson and incoming Dodgers President Stan Kasten, is expected to hold its first news conference on Wednesday. Dodgers controlling owner Mark Walter, who arranged the financing as chief executive of Chicago-based Guggenheim Financial, is expected to make a rare public appearance at the news conference.

Just received the following news from the Dodgers -

LOS ANGELES, May 1, 2012 - The Los Angeles Dodgers, Guggenheim Baseball Management LLC (“GBM”) and Frank McCourt today announced the completion of the sale of the Dodgers to GBM for $2 billion. As previously reported, the Dodgers’ new ownership includes Mark Walter as control person, Earvin “Magic” Johnson, and Stan Kasten as CEO of the organization.

The Los Angeles Dodgers stated, “The Dodgers emerge from the Chapter 11 reorganization process having achieved its objective of maximizing the value of the Dodgers through a successful Plan of Reorganization, under which all claims will be paid. The Dodgers move forward with confidence - in a strong financial position; as a premier Major League Baseball franchise; and as an integral part of and representative of the Los Angeles community.”
Posted by Roberto Baly at 11:00 AM