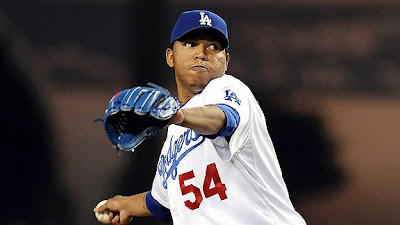 The Dodgers just made the following announcement. -

Belisario, 29, has made four appearances with Triple-A Albuquerque and Single-A Rancho Cucamonga this season, including tossing 1.2 scoreless innings in his two appearances with the Isotopes. Belisario last pitched yesterday and fired a scoreless frame against Oklahoma City (Astros).

MacDougal was in his second year with Los Angeles after re-signing as a free agent this past offseason. The 35-year-old posted a 7.94 ERA in seven appearances this season.
Posted by Roberto Baly at 4:30 PM