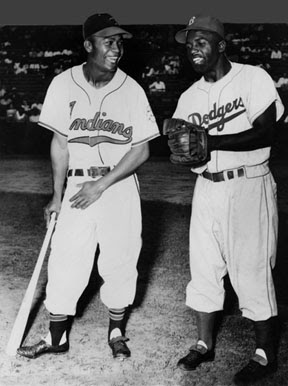 Today at the South Pasadena Public Library, the Baseball Reliquary opens an exhibit titled "And The Walls Came Tumblin' Down: Pioneers of Baseball's Integration."

From the Baseball Reliquary -

This exhibition utilizes a variety of historic photographs, artworks, artifacts, and documents to spotlight several figures who played pivotal roles in integrating baseball. The importance of Jackie Robinson and Branch Rickey to breaking baseball’s color barrier is well known, but what about the contributions made by Bill Veeck, Larry Doby, Lester Rodney, and Emmett Ashford? The exhibition showcases the stories of these and other lesser-known heroes whose efforts to integrate baseball are deserving of wider recognition. Bill Veeck attempted to buy the Philadelphia Phillies in 1942 and stock the team’s roster with Negro League players, five years before Jackie Robinson’s debut with the Brooklyn Dodgers, but was foiled by National League owners and baseball’s commissioner. Cleveland Indians outfielder Larry Doby integrated the American League in 1947, but his pioneering role is often overlooked in contrast to Jackie Robinson. Lester Rodney was the sports editor of the New York "Daily Worker," the American Communist Party newspaper, whose unrelenting crusade against baseball’s Jim Crow tradition helped lay the groundwork for Robinson’s historic breakthrough. Emmett Ashford was the first African American umpire in both minor and major league baseball, and the racism he encountered was exacerbated by the fact that he was a figure of authority, whose judgments determined who was safe and who was out and ultimately the outcomes of the games themselves.