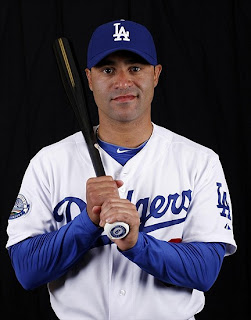 The Los Angeles Dodgers today reinstated infielder/outfielder Jerry Hairston from the 15-day disabled list and placed infielder Justin Sellers on the 15-day disabled list (retroactive to May 23) with a bulging disc in his lower back. Sellers batted .250 (6-for-24) with a home run and two RBI in nine games during his most recent stint with the club and overall was hitting .205 in 19 games with Los Angeles.

Hairston has appeared in 19 games with the Dodgers and batted .315 with a home run and four RBI prior to straining his left hamstring while legging out a single on May 6 at Chicago-NL. Hairston, who will celebrate his 36th birthday on Tuesday, has made 15 starts with the Dodgers this season, including eight at third base, five in left field and two at second base. The Illinois native made two rehab appearances with Triple-A Albuquerque on Wednesday and Thursday, starting in left field on Wednesday before playing the infield last night.
Posted by Roberto Baly at 4:08 PM