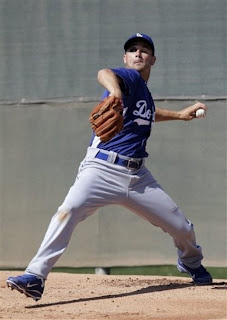 The Los Angeles Dodgers today placed left-handed pitcher Ted Lilly on the 15-day disabled list (retroactive to May 24) with left shoulder inflammation and recalled left-handed pitcher Michael Antonini from Triple-A Albuquerque. Lilly was 5-1 with a 3.14 ERA and a .203 opponents’ batting average in eight starts this season, last pitching on Wednesday at Arizona. This will be Lilly’s second stint on the disabled list this season after opening the campaign on the DL and missing the club’s first eight games due to neck stiffness.

Antonini, 26, will appear on the Dodger roster for the second time this season and is looking to make Major League debut after he did not make an appearance during his brief two-game stint with the club from April 24-25. The Pennsylvania native last pitched on Tuesday against Fresno (Giants), allowing three runs on three hits in a 5.0-inning start, and has gone 1-2 with a 5.31 ERA in nine games (eight starts) with Triple-A Albuquerque this season. Antonini is in his second season in the Dodger organization and was selected to the Dodgers’ 40-man roster on Nov. 18, 2011 after being acquired on Dec. 27, 2010 from the Mets in exchange for infielder Chin-lung Hu. He was originally selected by New York in the 18th round of the 2007 First-Year Player Draft.
Posted by Roberto Baly at 3:00 PM