Juan Uribe goes to the D.L. 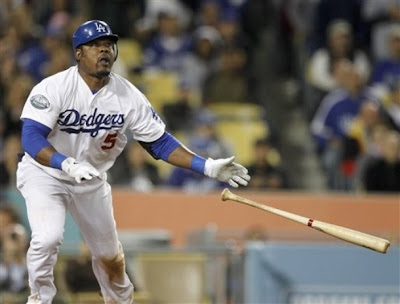 Juan Uribe goes to the DL. Elian Herrera is coming from Albuquerque and they designated Trent Oeltjen for assignment.

The Los Angeles Dodgers today placed infielder Juan Uribe on the 15-day disabled list with a left wrist injury and purchased the contract of Elian Herrera from Triple-A Albuquerque. Uribe was hitting .250 with a homer and 10 RBI in 25 games, all at third base.

The switch-hitting Herrera was on fire for the first-place Isotopes, batting .358 (43-for-120) with two homers, nine doubles, 14 RBI and nine stolen bases in 28 games. The native of the Dominican Republic had an on-base percentage of .381 and saw time at shortstop, third base, second base, center and left field. The 27-year-old was hitting .404 against left-handers and was batting at a .409 clip (18-for-44) during the month of May. Herrera, who will wear No. 37, was originally signed by the Dodgers as a non-drafted free agent on May 14, 2003. He is expected to arrive prior to the start of the game tonight.

To make room for Herrera on the 40-man roster, the Dodgers designated outfielder Trent Oeltjen for assignment.
Posted by Roberto Baly at 5:00 PM