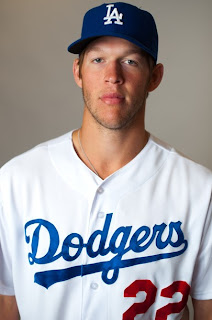 Dodger pitcher Clayton Kershaw has been named the National League Player of the Week for the period ending May 20. The announcement was made earlier today on MLB Network.

Kershaw was a perfect 2-0 in two starts last week, leading the Majors with 16.0 innings pitched and tied for the lowest earned run average (0.00) among qualifying starters. Over his two outings, the 2011 NL Cy Young Award winner added 10 strikeouts with three walks and 10 hits while not allowing a home run.

On Monday, May 14, the Dallas, Texas native tossed 7.0 shutout innings, striking out six and allowing just four hits in the Dodgers’ 3-1 win over the visiting Arizona Diamondbacks.

On Saturday night, Kershaw outdueled St. Louis Cardinals starter Jake Westbrook in a 6-0 shutout at Dodger Stadium. The seventh overall selection in the 2006 First-Year Player Draft doubled and scored a run in the Dodgers’ four-run seventh inning, which broke a 0-0 tie. The opposite-field two-bagger was the first extra-base hit of Kershaw’s career after collecting 28 singles in five Major League seasons. The 24-year-old needed 116 pitches to dispatch the defending World Champions, striking out four and not allowing a walk en route to his first complete-game shutout of the 2012 campaign.

The shutout extended Kershaw’s scoreless innings streak to 22.0, dating back to his May 8 start vs. San Francisco. With his two victories during the week, Kershaw improved his record to 4-1 on the season. The left-hander currently ranks second in the National League with 61.2 innings pitched, and is third among qualifying pitchers with a 1.90 ERA and 0.88 WHIP. This is his second career weekly award, having won previously for the period of June 20-26, 2011.

In recognition of his National League Player of the Week Award, Clayton Kershaw will be awarded a watch courtesy of Game Time, the leader in licensed sports watches, available at MLB.com.
Posted by Roberto Baly at 1:00 PM