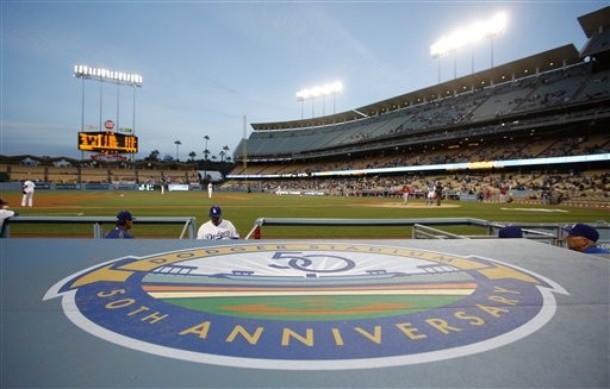 HEARTS FULL OF SPRING: The Dodgers will play their final exhibition game this afternoon in the rubber match of a three-game Freeway Series with the Angels. Today marks the fifth meeting between the two clubs during the exhibition season (2-1-1) with the Dodgers winning last night, 4-1. The Dodgers and Angels will meet six times during the regular season, beginning June 11 at Dodger Stadium.

·         The Dodgers’ victory last night was their first Freeway Series victory since 2009, having dropped both contests in 2010 and 2011 and the game in Anaheim Monday night. This week marked the first three-game Freeway Series since the Angels took two of three from the Dodgers in 2007. That year was also the last time the Fresco Thompson and Lefty Phillips Awards were handed out. These awards honor the MVP and most outstanding pitcher of the Freeway Series, respectively. In 2007, Orlando Cabrera took home the Fresco Thompson Award and Chad Billingsley won the Lefty Phillips Award. Early candidates for the awards are Juan Rivera (5-for-6), Dan Haren (1-0, 1.59 ERA) and Erick Aybar (4-for-8).

·         A victory this afternoon would give the Dodgers their first winning Spring Training since going 17-16-1 in 2007. On Saturday, the club clinched its first winning Cactus League campaign since joining the league in 2009 with a 14-13-4 record.

NATE DOGG: Dodger right-hander Nathan Eovaldi will make his fifth and final start of a memorable Spring Training this afternoon. Eovaldi has appeared in six games and gone 1-1 with a 1.72 ERA (3 ER/15.2 IP) while limiting the opposition to a .233 batting average. On Sunday, the Texas native was named the winner of the 2012 Jim and Dearie Mulvey Award as the top rookie at Spring Training. Eovaldi was selected as the winner in balloting by the club’s coaches and will receive a plaque in recognition of his accomplishments. A full list of past Mulvey Award winners, including last year’s winners Jerry Sands and Rubby De La Rosa, can be found on page 368 of the 2012 Dodgers Guide.

PARTY ROCK: The start of the regular season is tomorrow afternoon with the Dodgers opening the 2012 regular season at PETCO Park against the Padres. Clayton Kershaw will make his second consecutive Opening Day start for the Dodgers against San Diego right-hander Edinson Volquez.

·         The Dodgers are inviting fans to Dodger Stadium to watch the team open the season tomorrow and the event, including parking, is free. Non-alcoholic beverages and concessions are $4 or less and an additional discount of 15 percent will be applied to all Dodger merchandise on sale tomorrow. On top of all that, former Dodger and 1981 World Series Co-MVP Ron “The Penguin” Cey will sign autographs for fans on the Field Level concourse behind home plate from 4:00 to 5:00 p.m.  Gates open at 3:00 p.m. and fans can register to attend the event at www.dodgers.com/viewingparty.

HALL CALL: Today, legendary Brooklyn and Los Angeles Dodger, one of the Boys of Summer, Gil Hodges, would have turned 88. Despite being a rock in the middle of the order for the great Brooklyn Dodger teams of the 1950s, Hodges has not gained access to Cooperstown. The first baseman made eight All-Star teams, won two Gold Gloves and skippered the 1969 Amazin’ Mets. Hodges hit 370 career homers   while hitting over .290 in four different World Series (’53, ’55, ’56, ’59).

FOLLOW THE LEADERS: Dee Gordon and Andre Ethier have been two of Los Angeles’ hottest hitters this spring as Gordon ranks among the NL leaders in batting average (.379, 6th), steals (11, 2nd), runs (16, T-1st) and on-base percentage (.446, 4th), while Ethier is tied for third with nine doubles, tied for fourth with 16 RBI and tied for  sixth in the league with 44 total bases. Ethier’s .863 slugging percentage leads the club.
Posted by Roberto Baly at 11:00 AM