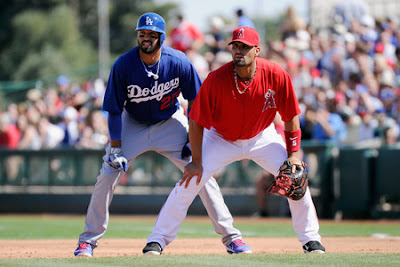 FREEWAY OF LOVE: The Dodgers take off south on the I-5 and head to Anaheim for a night game against the Angels this evening. The two clubs met twice during Cactus League action with the Dodgers winning big in Tempe on March 12 and the squads tying, 1-1 on March 18 at Camelback Ranch – Glendale. Following this three-game Freeway Series, the Dodgers and Angels will meet six times during the regular season, beginning June 11 at Dodger Stadium.

·         The Dodgers have not beaten the Angels during their Freeway Series exhibition games since 2009, having dropped both contests in 2010 and 2011. This year will mark the first three-game Freeway Series since the Angels took two of three from the Dodgers in 2007. That year was also the last time the Fresco Thompson and Lefty Phillips Awards were handed out. These awards honor the MVP and most outstanding pitcher of the Freeway Series, respectively. In 2007, Orlando Cabrera took home the Fresco Thompson Award and Chad Billingsley won the Lefty Phillips Award.

BULLPEN DAY: RHP Jamey Wright will get the start tonight and is expected to pitch 2.0 innings. Wright is 0-1 with a 5.23 ERA (6 ER/10.1 IP) this spring and his appearance tonight will tie him for the team lead with 10 games pitched. Following Wright to the mound will be several relievers, including Kenley Jansen, Javy Guerra, Scott Elbert, Todd Coffey and Mike MacDougal.

SEE YOU IN 2013!: Yesterday, the Dodgers played their final game of 2012 at Camelback Ranch – Glendale and lost to the Diamondbacks, 6-2. This year, 121,769 fans showed up to watch Dodger baseball, including the two largest crowds in Cactus League history on March 17 vs. the Giants (13,655) and March 18 vs. the Angels (13,648). The total numbers of fans at Camelback Ranch this season represents a more than fifteen percent increase over 2011.

·         During the game, most of the regulars left early to get a jump on their travel plans, but James Loney’s RBI double and Tim Federowicz’s run-scoring single gave Los Angeles its runs. Loney is hitting .294 with five doubles this spring. The first baseman’s nine RBI are tied with Justin Sellers for fourth on the team.

·         With Saturday’s win, the Dodgers clinched their first winning Cactus League campaign since joining the league in 2009. At 14-13 with three exhibition games left, the club is seeking its first winning Spring Training since going 17-16-1 in 2007.

THE BIG WINNER: The Dodgers would like to wish a very happy 67th birthday to the winningest pitcher in franchise history, Don Sutton. Sutton won 230 games with Los Angeles from 1966-80 and added on three more in 1988. The native of Alabama won his 300th career game in 1986 as a member of the California Angels and was inducted into the National Baseball Hall of Fame in 1998. That same year, the Dodgers retired his No. 20 on Aug. 14. The right-hander also leads the franchise in games pitched (550), innings pitched (3,814), strikeouts (2,696) and shutouts (52).

FOLLOW THE LEADERS: Dee Gordon and Andre Ethier have been two of Los Angeles’ hottest hitters this spring as Gordon ranks among the NL leaders in batting average (.390, 3rd), steals (11, 2nd), runs (16, 1st) and on-base percentage (.463, 5th), while Ethier is tied for second in the league with 43 total bases and 16 RBI and is tied for first with nine doubles. Ethier’s .896 slugging percentage leads the club.

AND THE MULVEY GOES TO…: Congratulations to Nathan Eovaldi on winning the Dodgers’ 2012 Jim and Dearie Mulvey Award as the top rookie at Spring Training. Eovaldi was selected as the winner in balloting by the club’s coaches and will receive a plaque in recognition of his accomplishment. The 22-year-old went 1-1 with a 1.72 ERA (3 ER/15.2 IP) in five games (four starts) in Cactus League play, while limiting opposing hitters to a .233 batting average. Eovaldi will make his final start of the exhibition season against the Angels on Wednesday at Dodger Stadium. A full list of past Mulvey Award winners, including last year’s winners Jerry Sands and Rubby De La Rosa, can be found on page 368 of the 2012 Dodgers Guide.

WHO’S READY!: The 2012 regular season kicks off for the Dodgers in just three days in San Diego and the Dodger Stadium 50th anniversary season begins in eight days. The Dodgers’ home opener against the Pirates has sold out, but a limited number of seats for the big day are available through the purchase of Full Season, 25-game Pick ‘Em and 15-game Mini Plan packages.