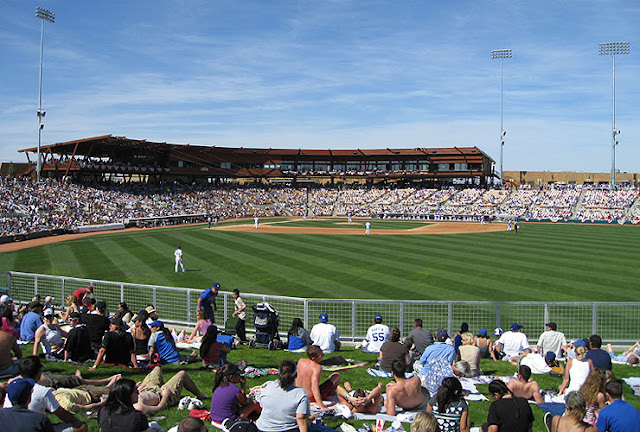 D-BACKS-TO-BACK: The Dodgers and Diamondbacks meet for the second consecutive day as Los Angeles plays its Cactus League finale today at Camelback Ranch. The National League West rivals will meet 18 times during the regular season, starting with a two-game series on May 14 and 15 at Dodger Stadium. Last year, the NL-West champion Diamondbacks won the season series with the Dodgers, 10-8.

The Dodgers would like to thank all the fans in the Valley of the Sun for a great fourth season in the Cactus League and extend the team’s gratitude to all the Camelback Ranch staff for their hospitality this spring as the club plays its final home game of 2012 in Glendale. Through 14 home games, the Dodgers have averaged 8,000 fans at CR-G, including the two largest crowds in Cactus League history.

HURLERS: RHP Chad Billingsley will make his sixth spring start today in his final tuneup before his regular season debut on Friday at San Diego. Each of Billingsley’s Cactus League starts have been at Camelback Ranch this spring with the 27-year-old allowing three runs in 5.2 innings in his previous outing on Monday against the White Sox. He will be followed to the hill by:

● RHP Matt Guerrier will make his fourth appearance of the spring after allowing a run in his inning of relief on Friday against the Brewers. Prior to that, Guerrier’s last appearance came on March 11 with the 33-year-old missing time due to a back injury.

● Four of the Dodgers’ top minor league arms will suit up for today’s game with RHP Allen Webster, RHP Shawn Tolleson, RHP Logan Bawcom and LHP Eric Eadington. Tolleson, the Dodgers’ 2011 Minor League Pitcher of the Year, last pitched with the big league club on Friday against the Brewers and has limited opposing hitters to a .143 batting average (1-for-7) in three appearances with the Dodgers this spring. Bawcom, who led all Dodger minor leaguers with 27 combined saves with Rancho Cucamonga and Great Lakes last season, has appeared in three big league games this spring, including an inning of relief on Friday against the Cubs. Webster enters 2012 ranked as the club’s No. 2 by Baseball America and allowed two runs (one earned) in 1.0 inning on March 23 against the White Sox in Tucson. Eadington, a 24-year-old out of Harvard, posted a 0.83 ERA (2 ER/21.2 IP) last season in 18 relief appearances with the AZL Dodgers and Ogden.

AND THE MULVEY GOES TO…: Congratulations to Nathan Eovaldi on winning the Dodgers’ 2012 Jim and Dearie Mulvey Award as the top rookie at Spring Training. Eovaldi was selected as the winner in balloting by the club’s coaches and will receive a plaque in recognition of his accomplishment. The 22-year-old went 1-1 with a 1.72 ERA (3 ER/15.2 IP) in five games (four starts) in Cactus League play, while limiting opposing hitters to a .233 batting average. Eovaldi will make his final start of the exhibition season against the Angels on Wednesday at Dodger Stadium. A full list of past Mulvey Award winners, including last year’s winners Jerry Sands and Rubby De La Rosa, can be found on page 368 of the 2012 Dodgers Guide.

RACE TO THE FINISH: Clayton Kershaw made his final spring start, allowing three runs on six hits in 3.2 innings, and the Dodgers scored six late runs to down the D-backs, 9-3, yesterday at Salt River Fields. Dee Gordon went 2-for-3 with a run scored, an RBI and his 11th steal of the exhibition season and Matt Angle slugged his first home run of the spring with a two-run shot in the eighth. The Dodger bullpen combined for 5.1 scoreless innings in relief of Kershaw, including 1.2 innings by Scott Rice and 1.1 innings from Ronald Belisario (2-0), who picked up the win.

·         With yesterday’s win, the Dodgers clinched their first winning Cactus League campaign since joining the league in 2009. Additionally, at 14-12 with four exhibition games left, the club is seeking its first winning Spring Training since going 17-16-1 in 2007.

FOLLOW THE LEADERS: Dee Gordon and Andre Ethier have been two of Los Angeles’ hottest hitters this spring as Gordon ranks among the NL leaders in batting average (.397, T-4th), steals (11, 2nd), runs (16, 1st) and on-base percentage (.470, 3rd), while Ethier leads the league with 43 total bases, is tied for the league lead with 16 RBI, nine doubles and three triples and leads the Dodgers in slugging percentage (.896).

WHO’S READY!: The 2012 regular season kicks off for the Dodgers in just four days in San Diego and the Dodger Stadium 50th anniversary season begins in nine days. The Dodgers’ home opener against the Pirates has sold out, but a limited number of seats for the big day are available through the purchase of Full Season, 25-game Pick ‘Em and 15-game Mini Plan packages.

LEAVE THE LIGHT ON: The Dodgers will pack up and leave Arizona for Southern California following today’s game against the Diamondbacks at Camelback Ranch – Glendale. The Freeway Series against the Angels gets underway tomorrow night in Anaheim (7:05 p.m.) with games on Tuesday night (7:10 p.m.) and Wednesday afternoon (12:10 p.m.) at Dodger Stadium. Fans can get their first in-person look at the 2012 Dodgers by visiting Dodgers.com or calling 866-DODGERS.
Posted by Roberto Baly at 11:30 AM