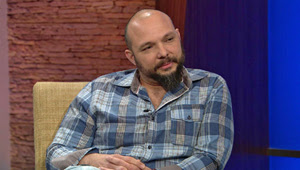 I met Josh Macciello at the bloggers softball game last month. (Which reminds me, I haven't posted pictures). He's a nice guy and we chatted for a few minutes.

Now, I don't know Macciello's past and current financial situation. And I really don't care. Nothing against Macciello, but why should we care? MLB never considered him a prospective buyer. So this is a mute point.

I had a feeling Macciello wouldn't have a shot at purchasing the Dodgers when Bill Shaikin of the L.A. Times never mentioned his name. Shaikin seems to be on top of this story and knows what's going on.

But ESPN did care and they believed in him. Last January I wrote a post asking if ESPN was playing around? Is Macciello the real deal? {linked here}

After writing that post, I got a e-mail from a ESPN employee asking for my phone number. I thought I was in trouble or something. It was a friendly conversation and just telling me that ESPN doesn't play around and they checked on Macciello's records.

Remember, this was January, when prospective buyers were making bids. I never saw Macciello's name afterwards as a serious bidder so I knew he had no chance.


The auction is a secret process, and the bidders making a play for the team have signed nondisclosure agreements. Though there have been plenty of leaks, no one is permitted to speak directly to the fans.
No one, except Josh Macciello.
Because, as it turns out, Macciello was never a real contender for the team. He is, instead, a fraud. Despite what he's told reporter after reporter, and despite what those journalists have dutifully repeated, he does not have billions of dollars. He does not have rights to any gold mines. He is, instead, a convicted drug dealer and a huckster who has used his talents to persuade many people — not just journalists — to place their confidence in him. In his wake he has left a string of abandoned projects and broken promises.
The Dodger play is his boldest stunt so far. And, judged strictly as a bid for attention, it was a fantastic success. Reporters and fans ate up the tale of the regular guy who wanted to buy the team. Never mind the gaping holes in that narrative: At the end of the day, it was a great story.
Read the whole story. It's fascinating.

At the end of the day, it doesn't really matter what the truth is because Macciello is not in the running to purchase the Dodgers.

Is that a shot against ESPN?

And of course, Macciello is not happy with all this. Check out his Twitter timeline. {linked here}

Oo I called it . I posted a comment when he was a hot topic of how he was a talker. Bring up those archives Roberto

Never trusted what he said since the beginning. Only because his case was dismissed does not mean he was not guilty of the charges. Court system has flaws too.

Seemed like a nice guy an had a decent slow pitch swing and was knowledgable about baseball. I played on his team in that tournie and was funny to see peeps up on his jock. I kept my distance and was just there to play some ball. Nice post.